Given Wizards of the Coast finally removed the negative intelligence modifier for Orc player characters, we thought it was about time we rolled up some Orcs for our next roleplaying game!

Today, we’ll be breaking out Epic Encounters: Hall of the Orc King to see what the team can come up with…

I’ve played orc and half-orc characters before, because I love orcs. From Warhammer to Earthdawn, Orcs have always been cool as far as I’m concerned.

My love of orcs is, I hope, pretty plain in the Epic Encounters set, and the sculpts do a wonderful job of evoking a sophisticated but violent culture.

I want my orcish player character to be Ragnar Lodbrok. With this in mind, I told Jamie Giblin, Steamforged Community Manager, that I’d using the gladiator miniature, which he graciously agreed to*. 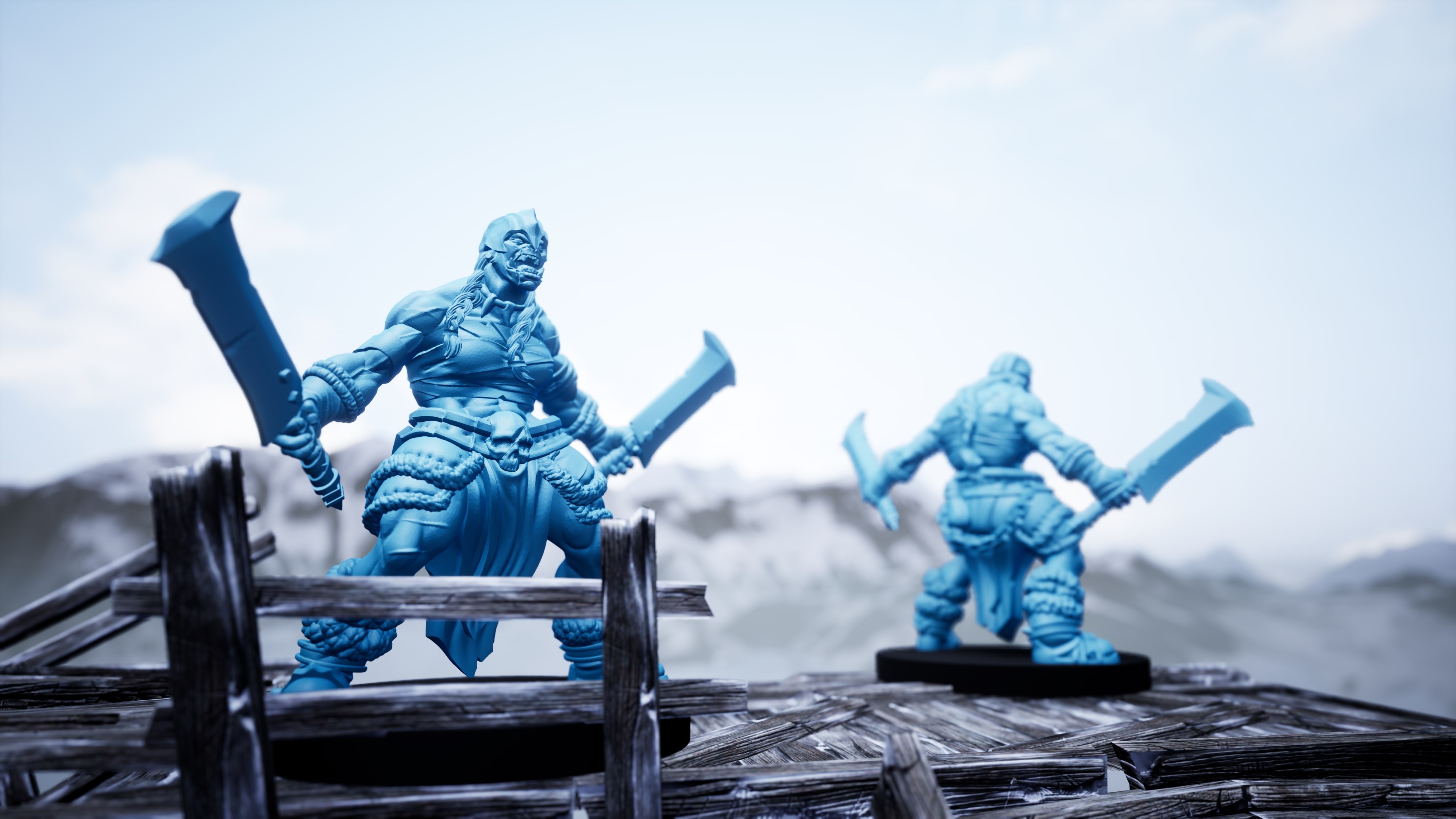 I then immediately chose Barbarian (obvious, yes) and put my best scores in Strength (of course), Constitution (yawn), and Intelligence (ah! Weren’t expecting that, were you?!).

That’s right. I’m a history nerd, and a lover of Robert E Howard’s original Conan the Barbarian stories, so dumb bruiser types don’t sit well with me as barbarians.

I want my character to be as swift in thought and strategy as they are in battle. Granted, this might not be the optimum build for a barbarian but, well, I’m not a min-maxer. I prefer to create the character I see in my head than the one who works best in a scrap—don’t judge me. 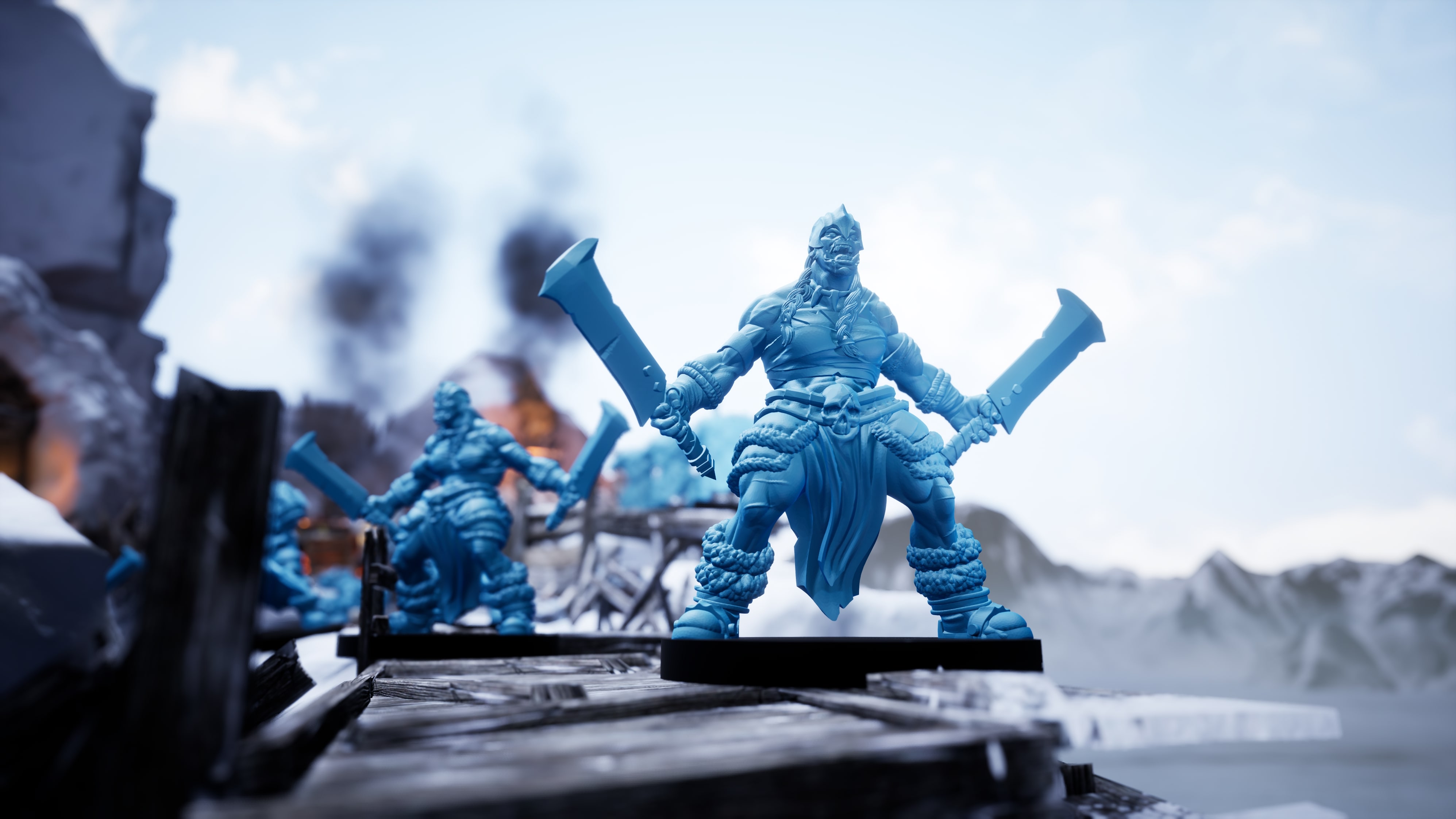 I’m not a huge fan of either of the Primal Paths in the corebook, or the ones available via Unearthed Arcana, but I’ve opted for the Berzerker. My barbarian might be smart but, when attacked, sometimes the red mist descends. Or, more often, after they are attacked they’re left covered in a red mist. And Mindless Rage is always useful, though I think I’ll call it Mindful Rage. It only gets used when they’re really exhausting all the options.

Finally, I need to decide on the weaponry they’re going to use. And I think it has to be a sword. Not a broadsword—too cliché—but something strong, resilient, and with a finely honed edge. Probably passed down over a few generations. This orc is from a line of clever warriors. They have quite the legacy to live up to. Best get adventuring then!

*There is no truth to the rumours that I threatened to kidnap his pet dog if he objected. 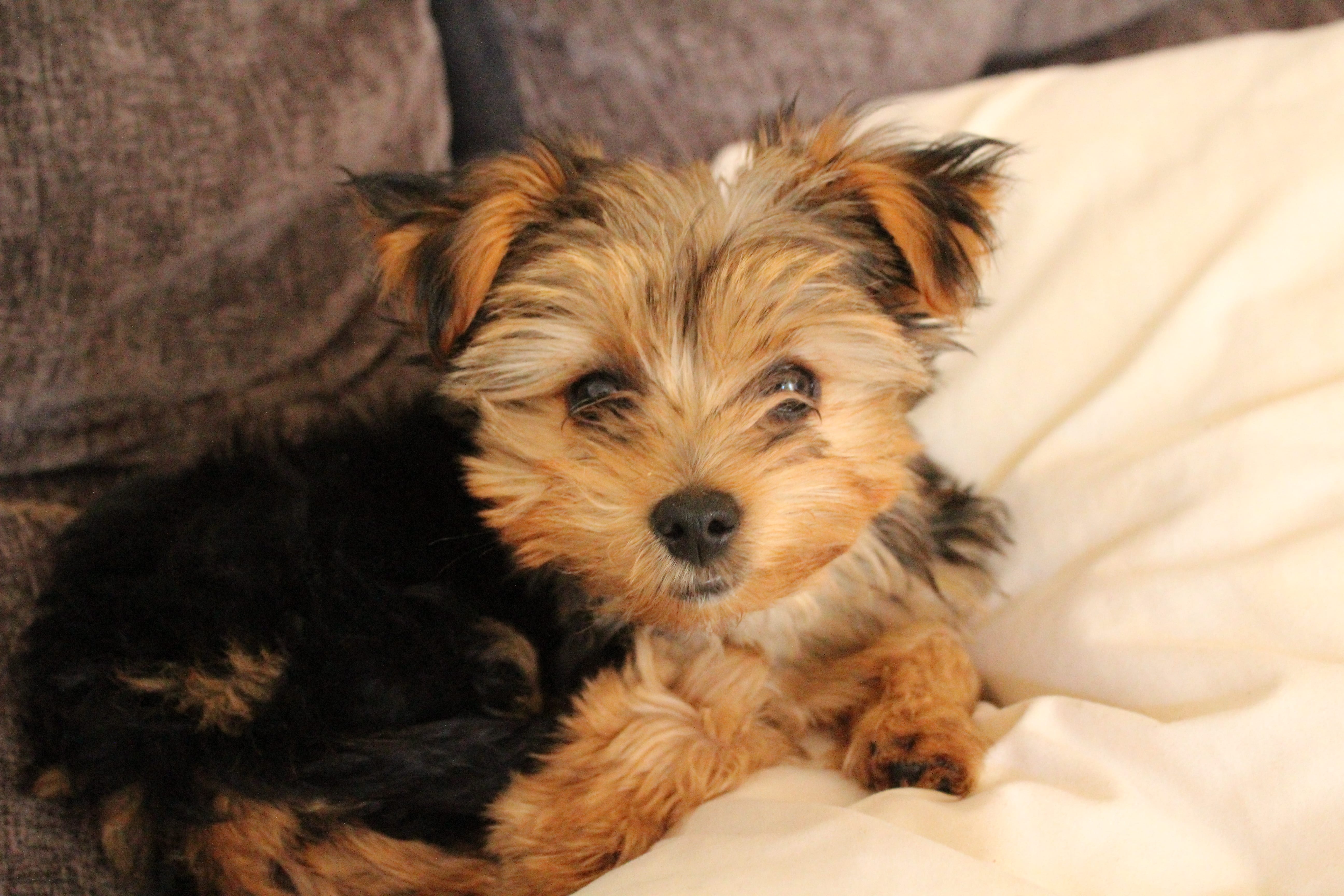 When we worked on the Orc project for Epic Encounters, I was lucky enough to sculpt the Orc chef model, and so the chance to play this slab o’meat as a character is too delicious to pass up!

My good friend Antonio DeMico recently released a set of ‘cooking themed’ characters for D&D which are amazing, but for this build I stuck to standard 5e material.

I knew I wanted a hefty character who was nonetheless a supportive role in a group. Consequently, I built Shankfist as a Bard, which I feel makes perfect sense. 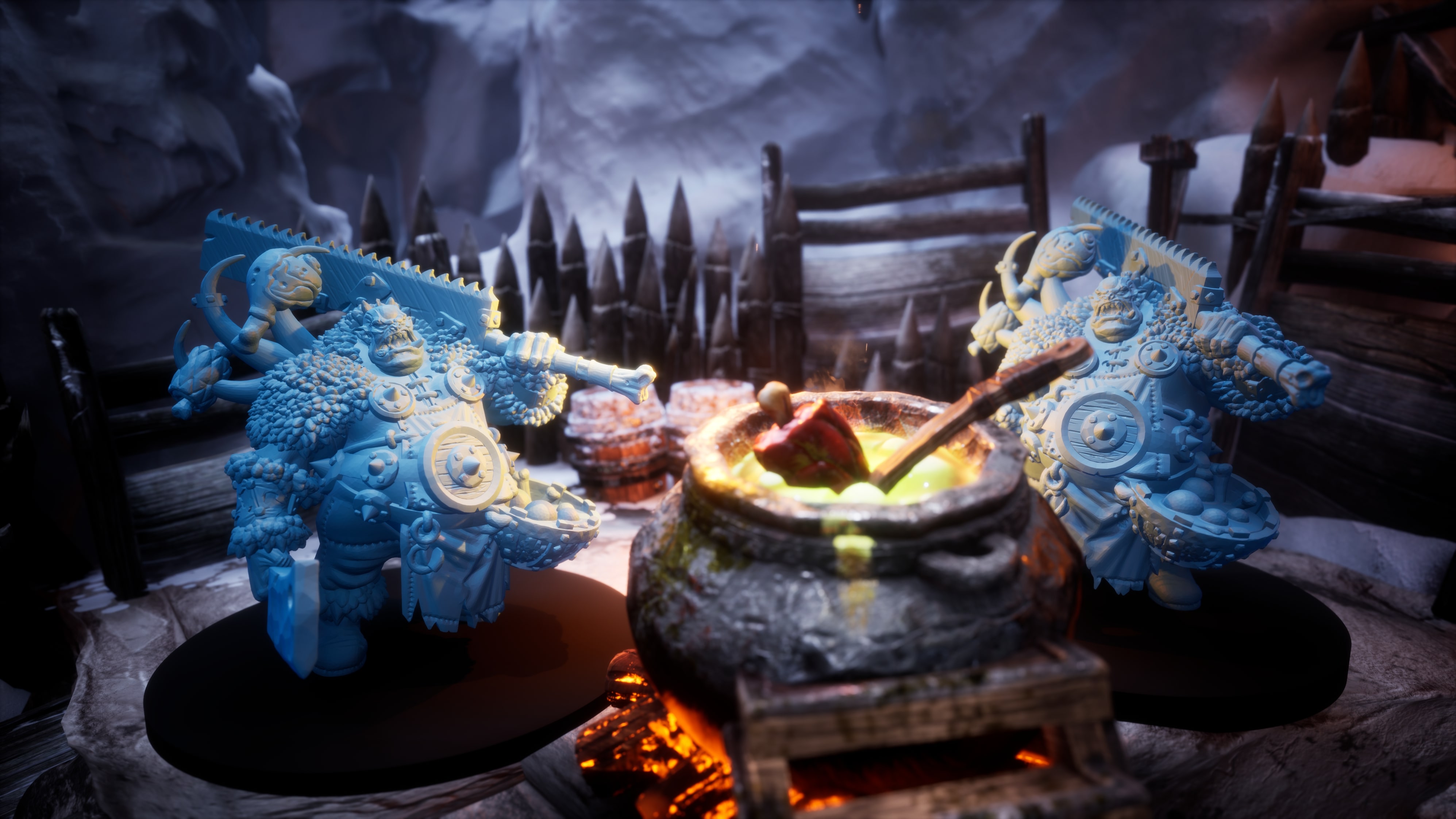 He is a charismatic Orc, but lacking in Wisdom. He has a high Constitution due to the long hours he works in a pressured environment, and is strong enough to wrestle the lids off the tightest of jars!

I made Shankfist a Bard of Lore and reflected his chosen career through my choice of skills and spells. I made his ‘performance’ instruments his cooking equipment, making his three instruments be a skillet, knife set, and condiment pouch.

I’m imagining some combination of Gordon Ramsey sharpening his knives and the ‘salt bae’ chef sprinkle all being part of his inspiration as he flips juicy treats from the skillet to his companions. 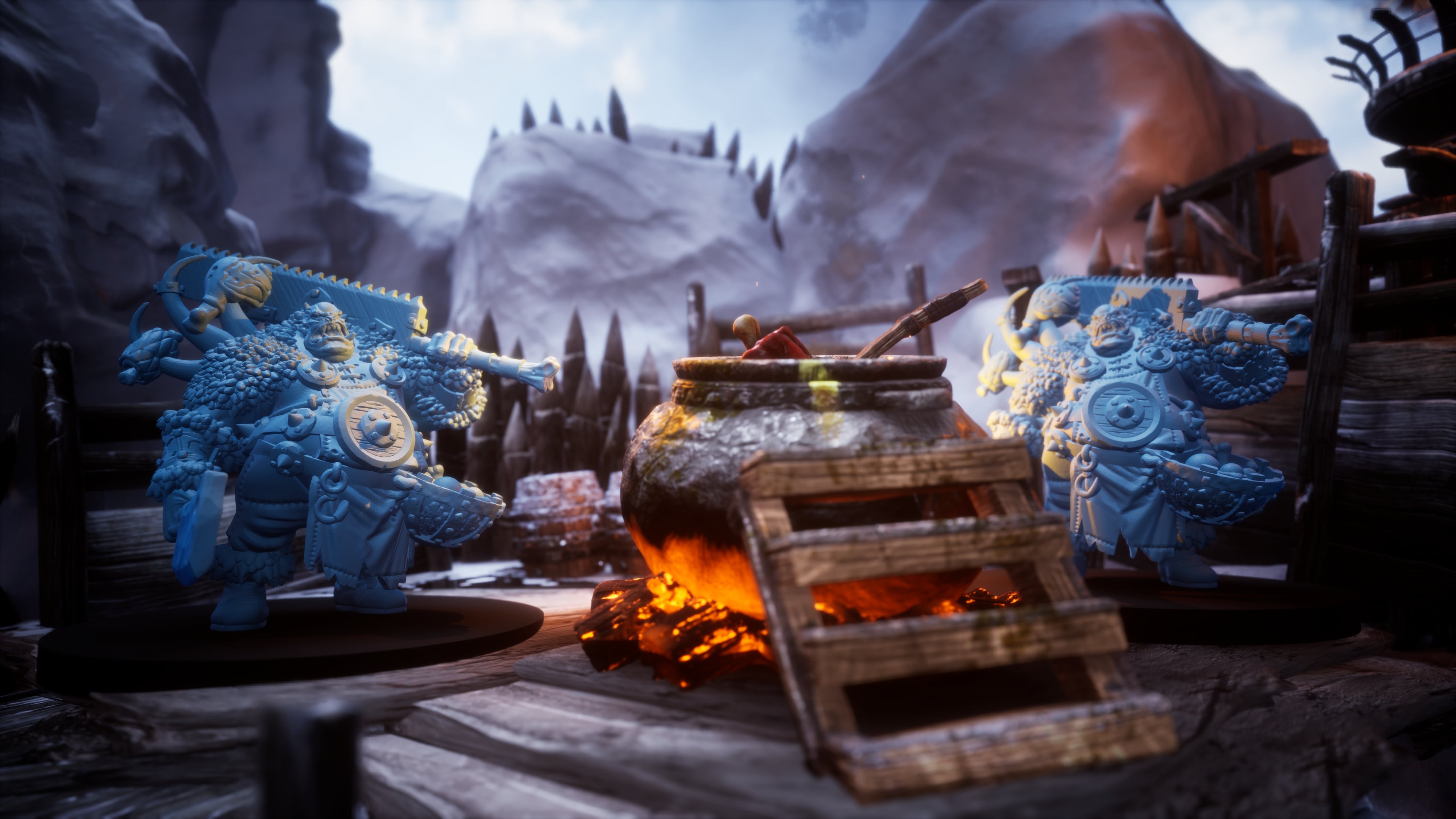 To this end, I also ramped up his skills in Performance (obviously), Survival, and Animal Handling—all of which felt like the skills he’d use to gather the ingredients for his various recipes!

Shankfist’s spell choices are focused on his role as chef and host. I like a character with a strong theme, but I also know all of these spells have utility outside of their theme!

I then gave him Enhance Ability, to represent the benefits of different meals; Heat Metal, allowing him to get that skillet working anywhere; Speak with Plants, for tips on the best sources of vegetables and salads; and Tiny Hut, so he could set up a pop-up street food kitchen at will.

My last mechanical pick for Shankfist was, at level 4, taking the Elemental Adept feat. Being resistant to heat and fire was a thematic choice reflecting his time in hot kitchens but is also pretty handy as Fire damage is so common in encounters!

I have kitted him out with leather armour which represents his heavy chef’s gear and leather apron, and his ‘sword’ is actually the large bone saw he carries around. My one regret is that he doesn’t have a chef’s hat, but I think that’s an easy add I can make to my miniature when I paint him up!

I am really happy with the way Shankfist looks and feels in-game. I’ve resisted the temptation to seek special magic items or unusual house rules from the DM, as I’m really happy with how I could make his theme work strongly within the existing mechanics of the game.

He might not be a typical Bard, but he is effective, memorable and most importantly, a LOT of fun!

Which Orc player character build was your favourite?

Why not check out the rest of the minis in the Hall of the Orc King and have a go at making your own?

We’d love to see them if you do, so don’t forget to share on Twitter with #EpicEncounters and tag @SteamforgedLtd.