Expect the Unexpected: Challenges & NPCs in Bardsung | Board Game Design

Sherwin is back with our third game design blog, and it’s a big one.

(Check out Exploration and Combat, too.)

If you’ve checked out Bardsung on BoardGameGeek, you may have spotted this sneak preview:

Encounter different enemies and challenges each time through Event, Battle, and Challenge decks that spawn new foes and throw curveballs in the form of poisoned weapons, traps, reinforcements, non-player characters, and more.

So, expect the unexpected! Now follow us into the dungeon...

(Pssst. Don't forget to follow the campaign to help unlock the exclusive Gladestrider!)

Hit 'Notify Me' on Kickstarter

Challenges, Puzzles, and NPCs in Bardsung

Last time, we talked about sequences and combat puzzles.

In that post, we focused on the heroes, and how you’ll have chances to make meaningful decisions that affect how your game plays out.

But, that’s only half of the story.

Whilst player agency was very high on our team’s list, we also wanted to introduce random elements that will force you to modify your behaviour.

(After all, no one likes finding an engine or pattern that breaks the game and takes out all the fun!)

While building this engine, we found a path that led to other aspects we wanted to explore: challenges and NPC characters.

We liked that so much, we named the cards aspect cards.

What Kind of Magic Spell to Use?

A dungeon door creaks open to reveal a shadowy room beyond. A vicious crew of enemies await. Some of the enemies look like the Reavers you defeated earlier, but their swords drip a viscous green fluid. They must be poisoned!

The aspect cards are split into two decks: battle and challenge.

When you explore, and place a new tile on the playing area, you'll draw a card from one of the decks.

As we touched on briefly in the combat blog, battle cards modify combat encounters.

They might introduce a more dangerous enemy variant, such as poisoned weapons, or add MORE enemies through either a sudden ambush or time-delayed reinforcements.

The list is long and varied, but each card shares the same objective—to keep you guessing, and encourage you to adapt to the changing state of play!

A mage will likely be content to sit back and blast foes at range, but if there’s an ambush, they’ll need to think fast to survive.

A cleric might be happier in a support role, but may reconsider when they realise the party needs to defeat all enemies within a set time limit before reinforcements arrive!

Because we already covered combat in the previous article, let’s not dwell too much on battle cards. After all, there’s a whole other deck to discover...

Challenge cards are a type of aspect card that you’ll draw when you find a tile that doesn’t have a combat encounter on it.

The deck includes a variety of events, weird and wonderful terrain, and dangerous hazards. 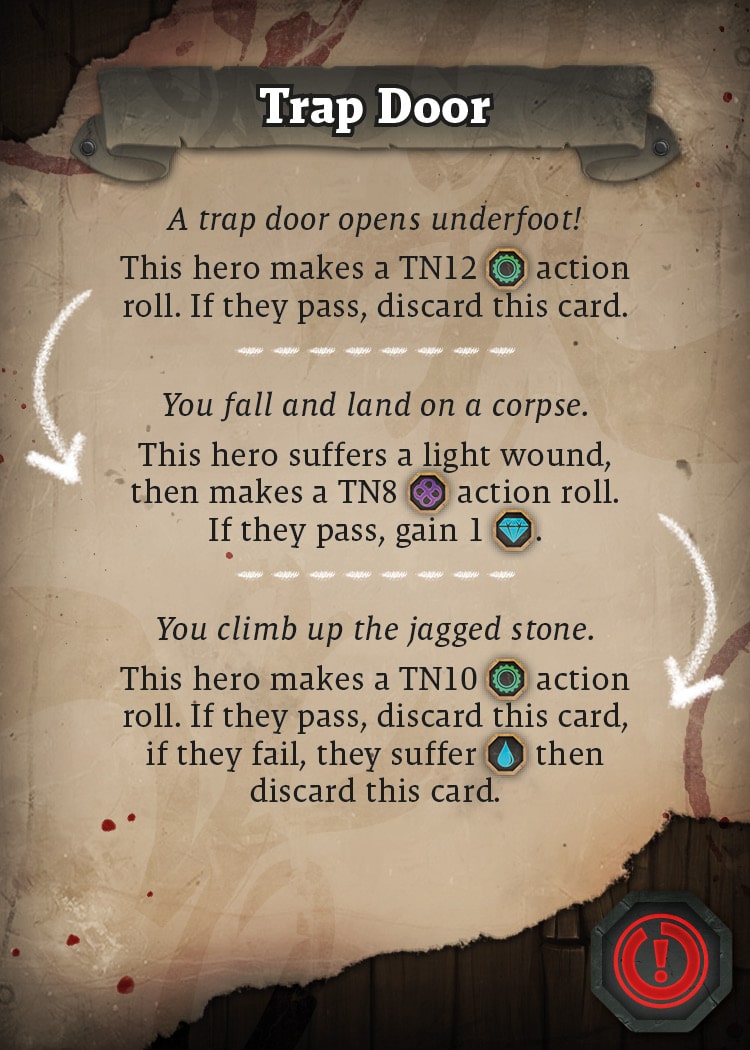 Immediate cards (like the Trap Door card shown above) have an effect that’s instantly resolved.

For example, a dexterity test to avoid an unexpected flying dart, or to leap away from a pit that’s opened underfoot. 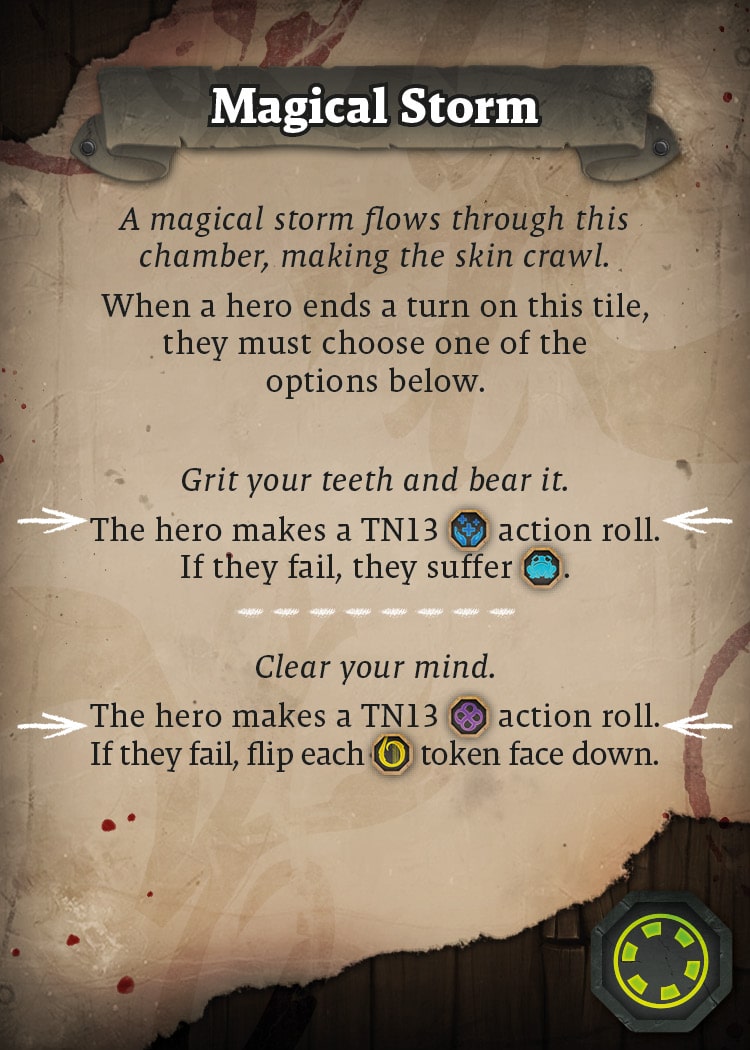 Sustained cards are persistent cards that remain in play and affect a specific area.

A good example here might be a magical vortex that hangs in the air, lashing out with crackling lightning to catch anyone unfortunate enough to be on the same tile! 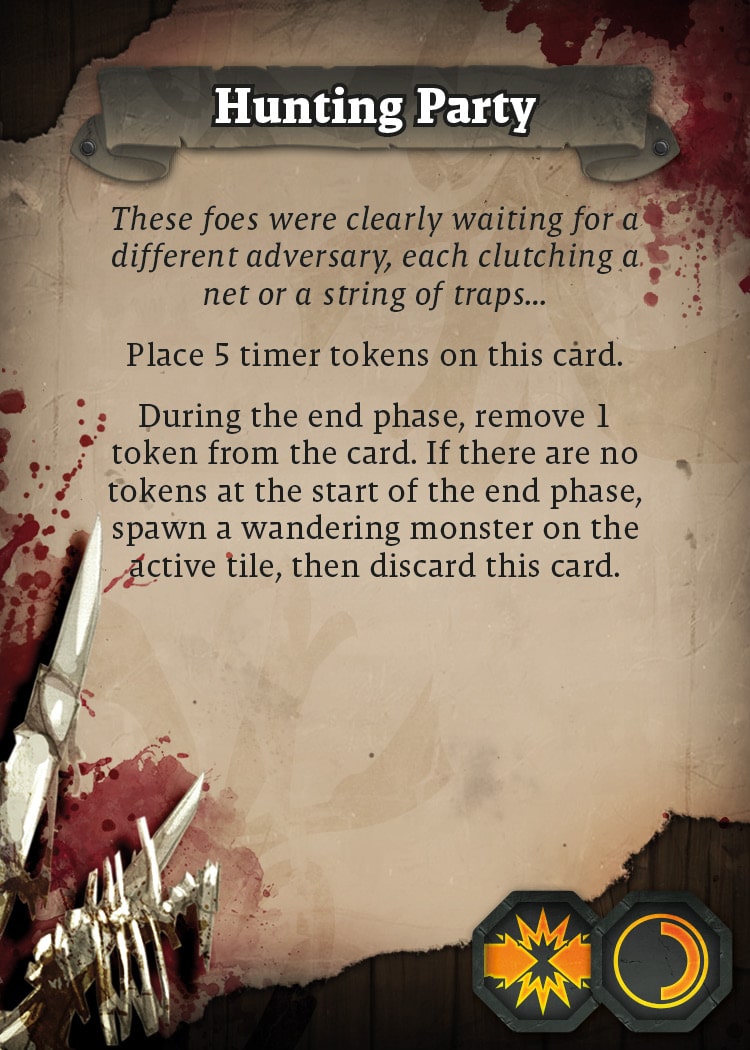 Delayed cards have effects that change over time, or are resolved after a certain number of turns.

A room with a burst pipe that’s slowly flooding, for instance. Or, a ceiling that is slowly lowering and threatening to crush you.

As with battle cards, the list of events we can cover here is near inexhaustible, and covers just about every instance you might encounter during a traditional RPG game.

Which leaves us with the final type of challenge card...

Found in your challenge deck, non-player characters (NPC’s) are a crucial part of any dungeon-crawler or RPG game, and Bardsung is no different.

In addition to the heroes and villains you’ll meet as you explore the depths, occasionally one of your party will draw an aspect card that introduces an NPC.

Typically, these are minor encounters. However, they may have long-lasting effects that crop up later in your campaign. 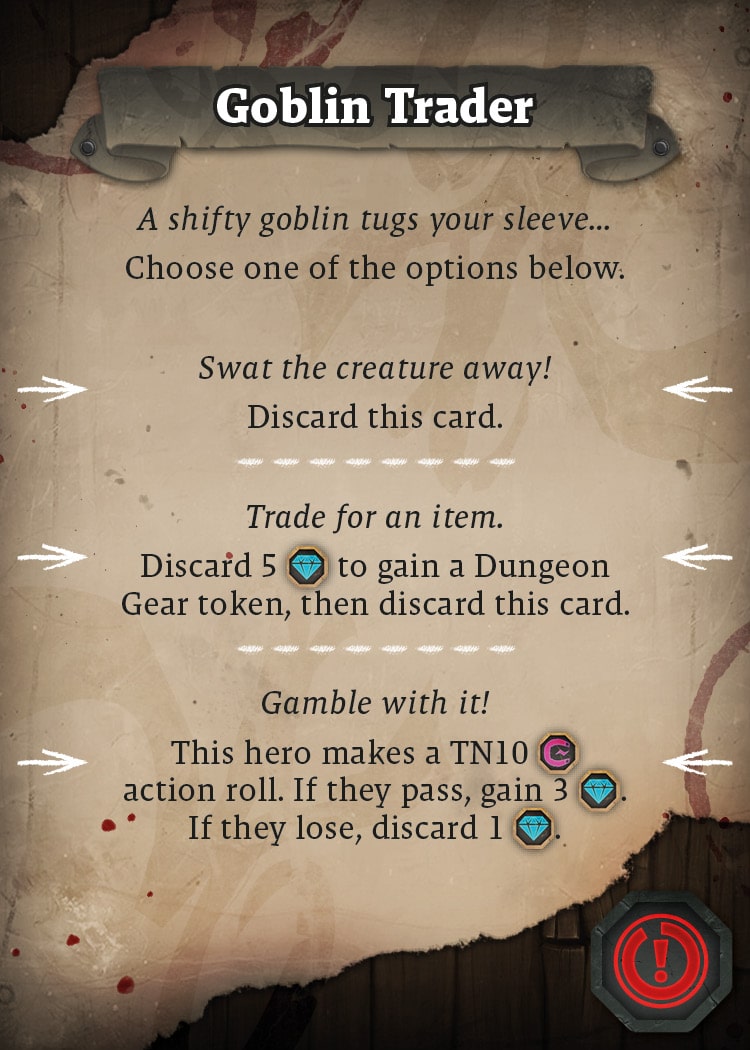 Some will require you to pass a skill test of some description or another. Others might have a branching option, requiring a specific piece of treasure or another cost.

And finally, the last type might even have a ‘choose your own adventure’ feel, where you’ll engage in a conversation with the NPC that lasts over several cards…

The possibilities are endless, but what’s more exciting is that they’ll be different each time.

And because the aspect decks evolve you continue through the campaign, interactions like this offer truly meaningful decision points. Exciting!

I’ll be back next time to discuss the turn order—or, in the case of Bardsung, the Marching Order engine, which we’re SUPER excited to share with you.

Don’t miss it. Enter the tavern and be first to know when it goes live!