Welcome back! Last time, we looked at how you’ll actually be building your dungeon as you progress through an encounter, making decisions on whether to explore in search of treasures, or race to the end.

Of course, one reason to tread carefully is the threats you might encounter as you travel those twisting tiles.

But don’t worry too much. Today, we’re taking a look at how you’ll handle those trials. It’s one of the most essential elements in any dungeon crawler—combat!

First, let’s talk a little about the design process.

We kicked off Bardsung with some very specific ideas about how we wanted combat to work. This isn’t our first rodeo by any means, and when we’re not holed up designing and developing, we’re all enthusiastic wargamers and RPG players in our (admittedly scarce) spare time.

Based on our joint experience, our baseline goal was to create a system that felt fluid and dynamic but would also be simple to learn, with depth hidden in the options you have available.

We wanted you to have agency on your positioning and the attacks you need to use in any given situation. And, of course, we wanted there to be an overarching sense of peril.

All too often, we’d come across games that devolve into heroes simply moving up to an enemy, and then making the same attack over and over.

That wasn’t something we wanted to emulate.

So, with these considerations in mind, we thought about how to best make them happen on the tabletop.

Traditional RPG games often give players a high level of agency in combat via a wide range of abstract abilities, which is something we definitely liked.

At the other end of the scale, miniature wargames offer tactile representation through model positioning, which we also wanted to dip into.

And finally, of course, board games opened up the possibility of a grid-based system, which is great for precision movement, without using tape measures, widgets, or the players having to ask how large a square is in-world.

This especially was very important to us. We wanted Bardsung to achieve our goals, whilst also feeling intuitive.

The result is an experience that embraces the strengths of all three systems—RPG games, miniature games, and board games—but also creates gameplay that’s easy to learn and understand at a glance, so even novice players can effectively strategise their turn ahead.

Now, let’s take a look at how this works on the tabletop!

Rather than traditional squares, Bardsung uses a zone-based grid system, which allows more freedom when moving and placing miniatures, and provides a far greater sense of openness within the playing area.

It also lends itself to building combos and streamlined enemy AI interactions, which means less pixel-crunching and more fluid action! 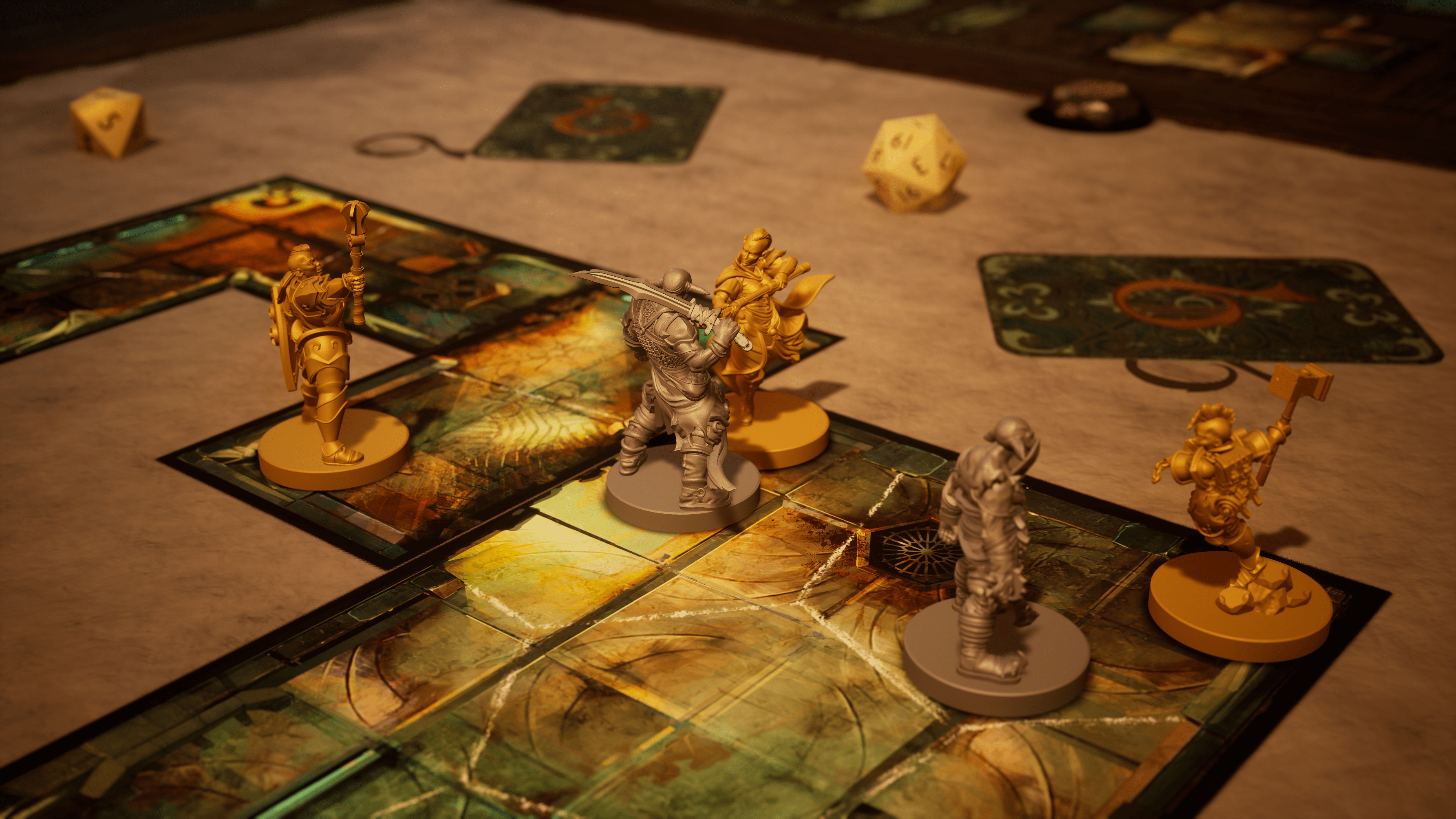 In this example, The Lightweaver is in the same zone as a lethal Reaver—really not a great place for anyone to be, especially if they’re not wearing a chainmail vest!

In order to protect their ally, The Dawnguard steps into the same zone and performs a Guiding Strike attack against the Reaver.

Guiding Strike isn’t a particularly powerful attack, and might not cause any damage if it hits, but it will definitely push the Reaver into an adjacent zone. 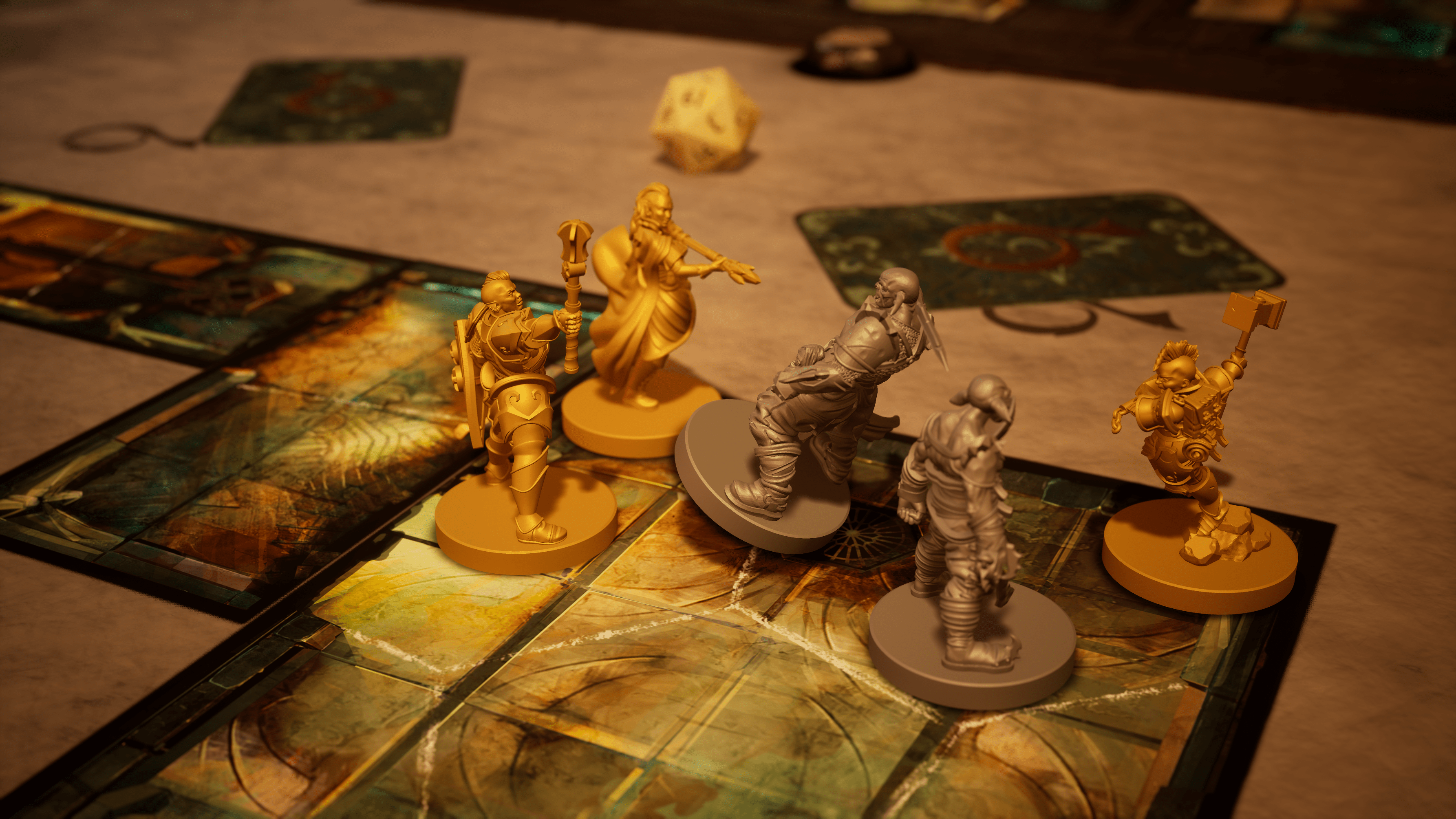 This is obviously great news for Lightweaver, who can now breathe a sigh of relief—but Dawnguard has another motive. The Reaver is pushed into a zone where Stoneheart is busy duelling with a spiteful Brigand!

Dawnguard’s turn ends, and now it’s time for The Stoneheart to take theirs.

Unlike Lightweaver, Stoneheart is far better equipped to face down enemies in close range. Not just because of their armour, but also their ability Backswing, which allows them to attack two different enemies in the same zone with a single action.

Ordinarily, attacking an enemy simply costs an action. In this case, for a powerful ability like Backswing, Stoneheart will also need to spend a fate token.

Heroes can earn fate tokens by performing set achievements during encounters, reinforcing their playstyle and role within the party. They’re a shared finite resource that must be recharged after using, so you’ll need to discuss with your party before you spend one!

In this example, Dawnguard has set up Stoneheart in two ways:

Firstly, by pushing a second enemy into the same zone, ready for the Backswing. Secondly, by earning a fate token to pay for the ability (Dawnguard’s unique rules generate fate by pushing an enemy out of a zone containing another hero).

Stoneheart nods appreciatively to their ally, spends the fate token to empower their ability, and swings—and both the Reaver and Brigand are defeated! 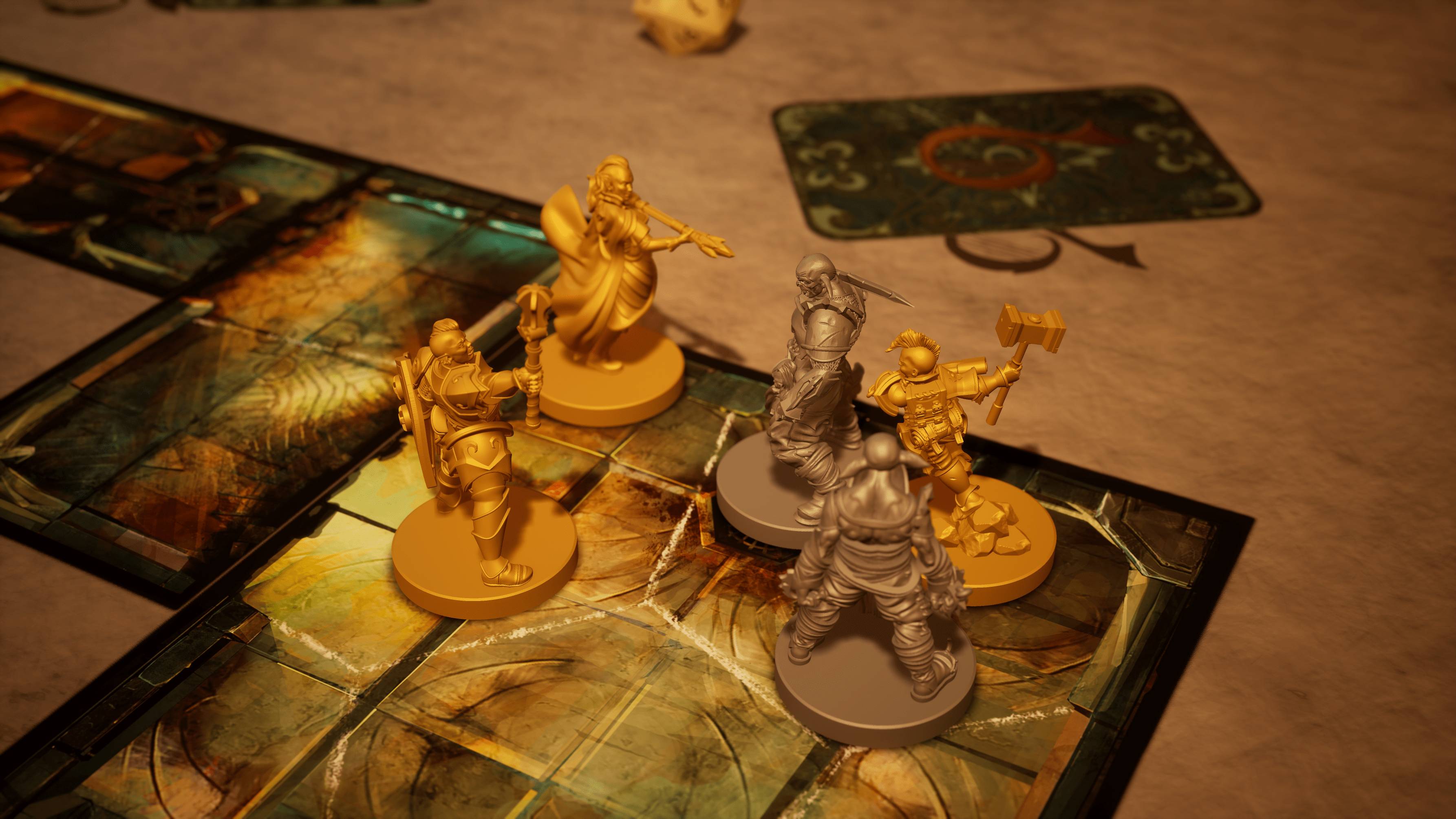 But What About the Puzzles?

Of course, there’s a lot more to combat than this simple example, but don’t worry, this is just a starter for ten. We’ll come back to this in a later post that deep dives into ability cards, and upgrading your heroes!

And, we haven’t even touched on aspect cards, which modify enemy attacks and behaviour and help establish combat puzzles, to keep you guessing...

...Which leads us nicely into the next post! Where we’ll be touching upon these aspect cards, before launching into the other challenges and events that await you in Bardsung’s dungeons.

Don’t miss it. Enter the tavern and be first to know!