SPOILER ALERT: There will be dungeon.

In this series, Sherwin will be sharing ALL the juicy details (and behind-the-scenes design secrets!) that made Dicebreaker label Bardsung this year’s most ambitious dungeon crawler.

Now, for the first time, let’s enter the dungeon…

My enthusiasm is boiling over today, heroes. After a long summer of intense development, I can FINALLY start telling you about our new game!

First Things First: What is Bardsung?

For those of you who didn’t catch our vlog in the tavern, Bardsung is a cooperative RPG dungeon explorer that takes all our favourite things about old-school dungeon crawlers and choose your own adventure books, adds a healthy helping of what we love about roleplaying games, and then seasons with the customary Steamforged polish.

The result is a game I’m extremely proud to have worked on (and to serve to you lovely folks!).

Bardsung feels at once intimately familiar (if you’ve experienced either of the genres mentioned above, or one of our tabletop adaptations such as Dark Souls™: The Board Game) but also like a fresh take on the genre, that reduces complexity and adds fluid and dynamic structure.

Excited? I know I am! But where to begin?

Well, after much discussion, Mat and I decided we should start this blog series with something that sums up what I mentioned above. Something instantly understandable to those familiar with RPGs and dungeon crawlers, but that also has a unique twist in Bardsung:

But What Are We Exploring?

I’m so glad you asked!

In Bardsung, you’ll take control of aspiring heroes as they attempt adventures legendary enough to make them worthy of being immortalised in bard song.

After all, what greater accolade is there than a musical legacy that would see you remembered for generations to come?

The first destination for these figures is none other than an ancient underground settlement, built by [sorry, Sherwin, we’re not letting you share that just yet! – Chynna-Blue], where they’ll encounter [REDACTED], and have to fight their way to [REDACTED], in an epic dungeon that spirals ever downward towards their goal.

But as exciting as that sounds [Sorry for curbing Sherwin’s enthusiasm, heroes. All will be revealed soon, we promise! - Chynna-Blue], I’ll leave world building for another day.

We can, however, talk mechanics.

Let’s start with some design intenty-stuff.

If there is a universal yet seldom-talked-about truth of dungeon crawlers and RPGs, it’s that they all have a huge set-up overhead.

Whether it be a group searching for tiles and tokens, or a game master scribbling an adventure in their notebook before play can begin, building the dungeon is often as arduous as the journey.

Not so in Bardsung. The game was deliberately designed to take the laboriousness out of the dungeon-building process (more on this later).

However, we also appreciate the storytelling that naturally unfolds as a dungeon is constructed, and that’s something we didn’t want to lose.

You know the storytelling I’m referring to, where every room and corridor becomes a new chapter in the tale. Every turn an unexpected twist.

Even a dead-end can fire the imagination. Did the roof cave in on the poor previous inhabitants? Were they still mining through the rock when they were interrupted?

Perhaps a flooded corridor indicates water might rush in from places unseen...

Typically, this kind of information is introduced by a game master who controls the world with prose and steers the group by seeding prompts.

But Bardsung doesn’t have such a figure. And, typically, the requirement of dungeon crawlers for a player to pre-build a map takes that beautiful theatre of the mind and casts it aside. So, our challenge was how to best keep that sense of wonderment in our game.

The solution soon became one of the defining elements of Bardsung’s design.

Exploring (and Building!) the Dungeon 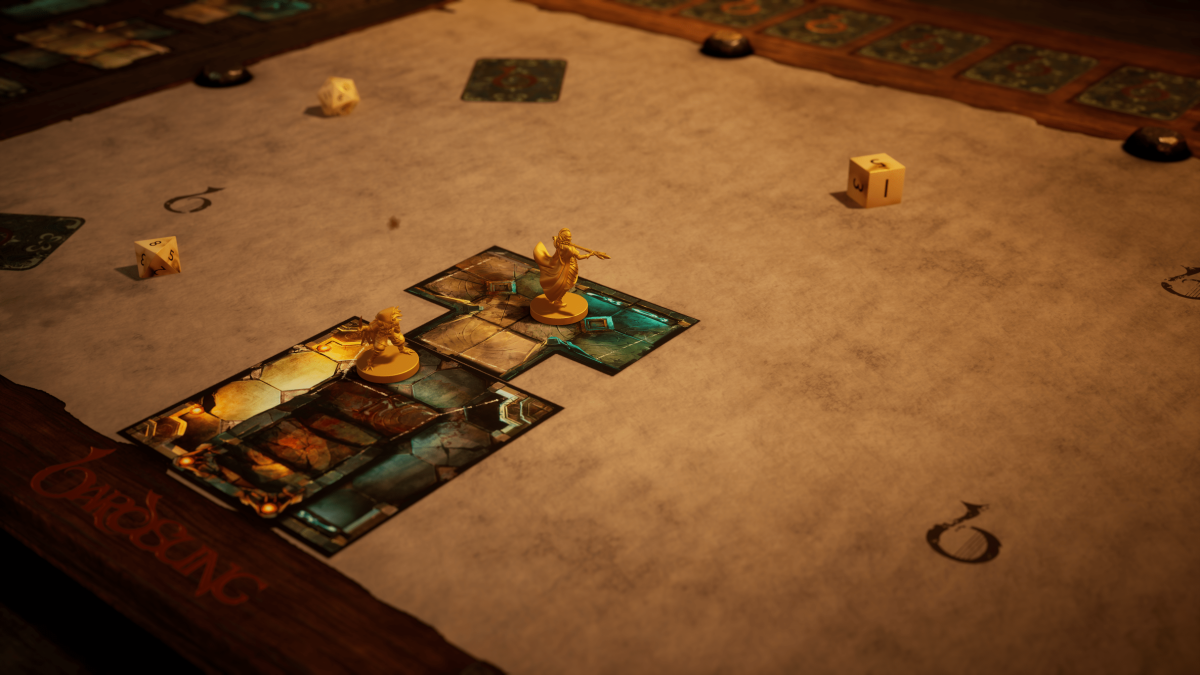 Bardsung’s campaign takes place over a series of encounters. In most of these encounters, the ultimate goal is surprisingly simple:

You start at one side of a playing mat. From there, you must reach a designated escape point, where you’ll find a set of stairs that lead deeper.

The escape point is typically the opposite side of the mat, but don’t take that for granted. Sometimes, you’ll have to reach a far-flung corner, or explore set areas to unlock the path ahead. Other times, you’ll need to search for a precious item, and so on.

Regardless, each encounter begins the same—with an entrance tile and little else.

As you explore, you’ll draw from two special decks which build out the dungeon with tiles as you go.

Although the game controls and varies the exact cards in these decks, their order is entirely random. This creates situations where you’re genuinely exploring the unknown, as the deck constantly evolves for new areas.

The cards will indicate which elements and tiles you can (or must) place on the mat.

When placing tiles, you can put them down in any orientation you want. Again, this isn’t as easy as it sounds, because we’ve built in several factors to consider.

Firstly, there’s the main objective of escaping, driving you to place your tiles in a way that helps steer your party towards the opposite end of the mat.

But then there are enemy and terrain placements to consider.

Is it a good idea to place a tile so that it leads directly forwards, if it means you’re suddenly surrounded by enemies with no time to prepare?

Or, perhaps you’ll take a suboptimal tile placement and a winding path, to avoid an ambush?

If you can’t place a tile because it would leave the playing area or overlap an existing tile, then you’ll place a dead-end token at the portal you tried to go through, blocking the path ahead and forcing you to double back to areas you thought you’d left behind.

Some of those areas may contain threats you thought you’d avoided, particularly because places can change even after you’ve left them (perhaps spawning new foes)...

Dead-ends can also be caused by unexpected events via the aspect deck, which we’ll return to in a few post’s time. 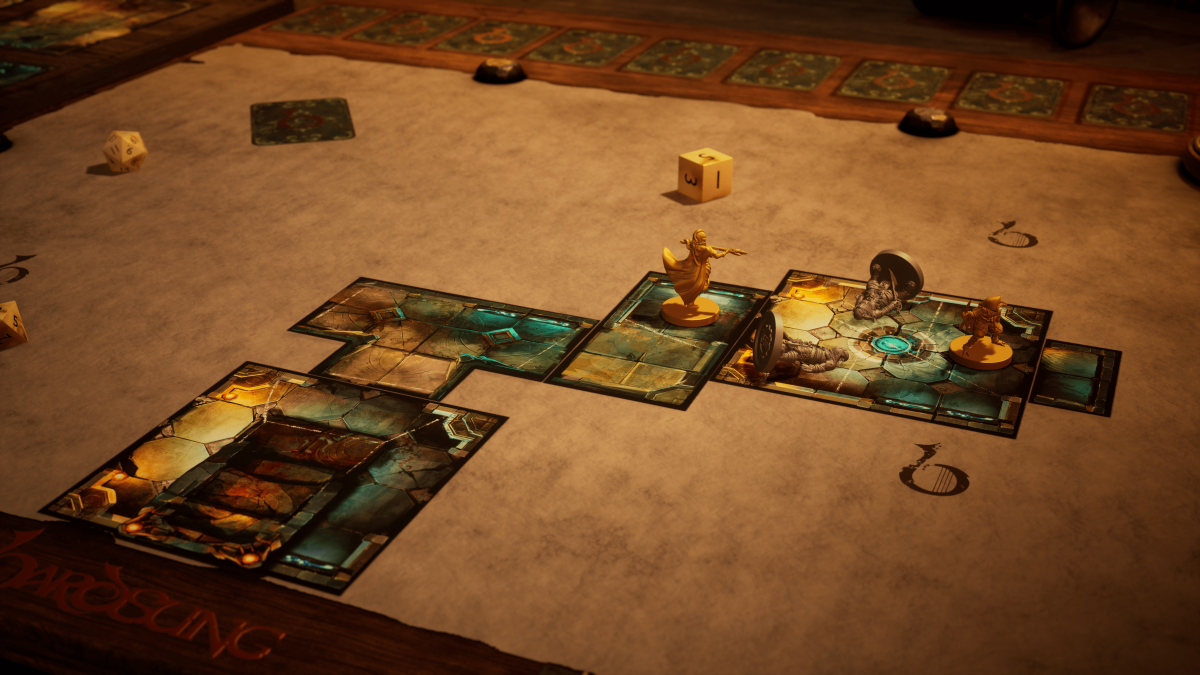 As you’ve probably guessed, Bardsung will rarely let you move in a straight line towards your escape point, instead providing plenty of twisting pathways to drag you off the beaten path.

And even if the gods are kind enough to offer a (relatively) direct route, you will nearly always benefit from exploring—either to defeat more enemies and gain more loot, or to find the special treasure cards that we’ve left hiding in the darkness...

(See those rune marks? They’d probably have something to do with that!)

The result is a roguelike experience which creates dungeons that would thrill any RPG group during their game session, and inspires players to make up their own stories and characterful eventualities from the game. 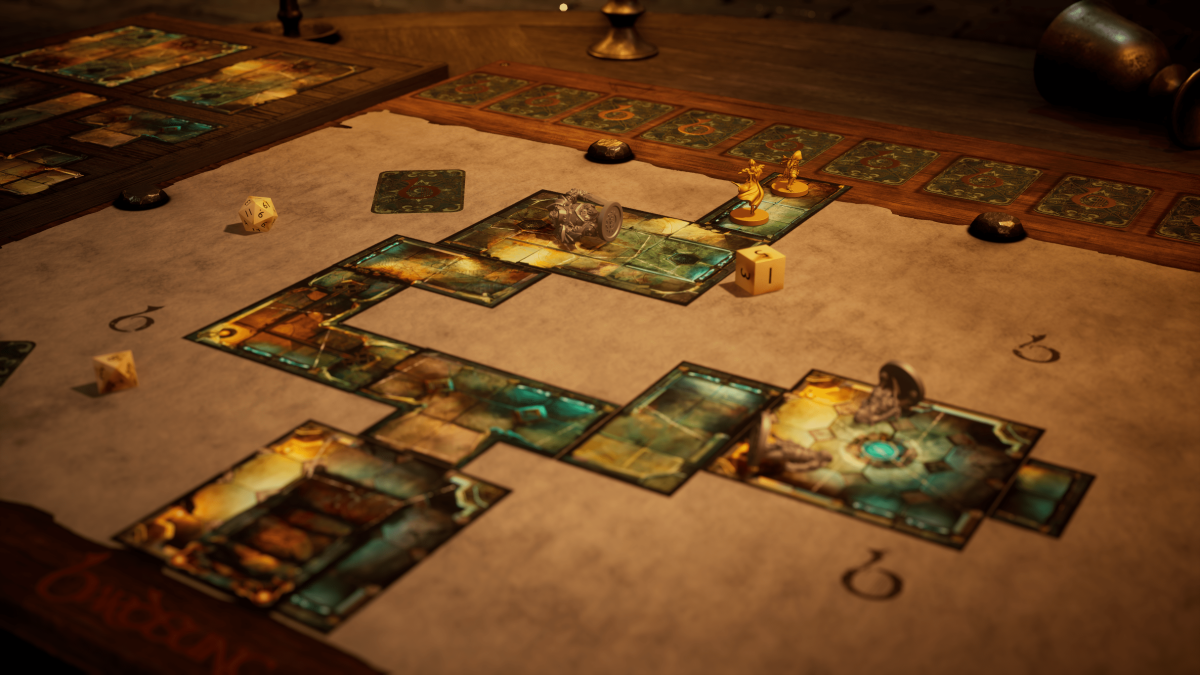 And better yet, because it requires minimum set-up, you can roll up your sleeves and dive right in!

But What About the Monsters?

Of course, exploration is nothing without the gameplay that comes with it.

Next time (VERY soon indeed) we’ll be talking combat, so join the mailing list or enter the tavern to make sure you don’t miss it!