Behind-the-Scenes! Creating the Game | Monster Hunter World: The Board Game

Hi, hunters! I’m Alex, the Product Owner for Monster Hunter World: The Board Game, and I’m here to give you a peek behind the curtain at how we created the game.

Just like the monsters that populate it, the Monster Hunter: World universe is HUGE. While that gave us a large amount of cool content to work with, it also made it impossible to include everything from the video game.

Hopefully, this post should help to answer some of your questions on how we decided on what to include for this Kickstarter campaign (follow the campaign here).

This is the first journal entry you’ll have seen from me so, before we jump in, here’s a quick explanation of my role on the project.

Chiefly, my job is to make sure the game you folks get is as good as it can be, while balancing that with the source material.

To help with all of this, I’ve got around 4,000 hours on the Monster Hunter clock (which is only rising with the most recent release), with about 1,500 of those hours spent on Monster Hunter: World across the various platforms it released on. 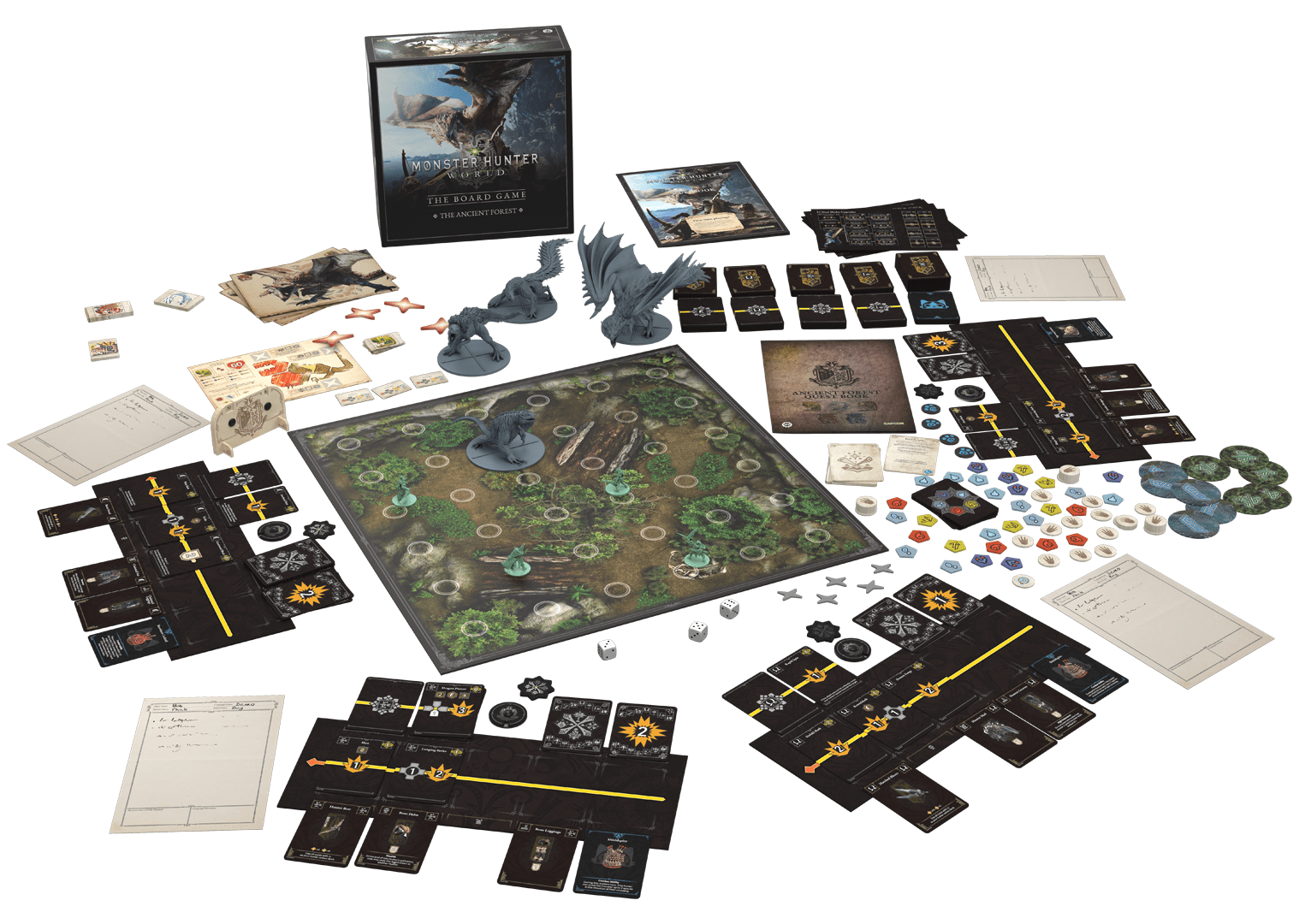 If you haven’t played the video game, some of what I’m about to say might not make a ton of sense. Still, I hope it’s interesting!

To make a long story short, an awful lot of thought went into every small detail of bringing such an amazing world to the tabletop.

To begin figuring out the best way to deliver an authentic Monster Hunter: World board game, we needed to break things down.

You know what that means? Spreadsheets. Lots and lots of spreadsheets, full of raw data.

To start with, these spreadsheets broke down every in-game location by the monsters you could hunt there, followed by which weapons could be crafted from the various parts of those monsters.

This gave us a baseline to start making decisions from, but it didn’t tell the whole story. To create the core sets, we had a lot of other things to consider.

For one, the two core sets needed to be fully compatible — both with each other, and with the expansions.

For two, we also need to think about (more boring) things like stock-keeping unit (SKU) count, box sizes, and other logistical items.

(Luckily, our awesome production team has a lot of experience with this.)

At first, that might seem strange — why not have boards that fit all the cards?

The short answer is that if the boards were longer, they wouldn’t fit in the box. So, to make them longer, we’d need to either fold them, or make the box larger.

In our experience, folded player boards can be a problem when it comes to cards laying flat. On the other hand, making the box larger for this one element would introduce logistical and storage considerations that could have a knock-on effect on price, shipping, order quantities, suppliers, vac trays, other box components, and more. So, when these elements worked in other areas, having slightly shorter player boards felt like the right call.

As you can see, even with the smallest decisions, there are a whole lot of plates to spin!

Where was I? Oh, right — spreadsheets.

If you recall, we had spreadsheets separating data out by location. Now, let’s step into the process.

To begin with, we chose monsters based on location, as that felt like the obvious call. And so the Ancient Forest and Wildspire Waste sets were born!

Because they’re so closely linked, the decision of exactly which monsters and hunters to include happened hand-in-hand. We’ll start with the hunters.

The hunter weapons were then chosen based on three criteria:

Sidenote: To confirm, the overall popularity of weapons from the video game was considered. However, when it came to choosing the weapons, video game popularity didn’t rank as highly as the considerations listed above. That’s partly down to how subjective folks’ favourite weapons can be, and partly for gameplay reasons.

All of the above landed us on the following hunters for the Ancient Forest set:

So, with those decisions made, we have a nice mixture of gameplay options and a variety of hunters for you to choose from.

Happening alongside this was the choice of which monsters to include in each set.

Monster Hunter: World is about three things — massive monsters, boss fights, and the various weapons and playstyles that come with different hunters.

There are so many awesome monsters in the video game and we couldn’t include them all. So, to help narrow our choice, we turned to weapons.

It was incredibly important to us that every player could craft an equal amount of equipment. No matter which hunter you chose, you’d have a starting weapon, its bone equivalent, and two potential additional weapons you could craft from fighting monsters.

We didn’t want anyone to get halfway through the game and realise they had fewer options than the rest of their party!

Naturally, the above would be determined by the monsters in the set, the weapon crafting options they offered, and the hunters that were included.

Several weeks of spreadsheets went into the above decision alone, balancing hunters with monsters across both core sets and the expansions to make sure everything lined up — equal options, varied playstyles, varied monsters, and scaling difficulty with upgrades.

And that’s not all.

We also needed to think about the physical miniature sculpts for the hunters, and how their weapon and armour sets should be chosen.

I’ll start by saying that featuring all of the ‘meta’ armour sets from various points in the video game’s life never really felt like an option.

Once you get into the weeds of a Monster Hunter video game, most of the time, you’ll be running around in mixed armour sets. Not to mention that the addition of layered sets means you can look pretty much however you like, while wearing a ‘clown suit’ underneath.

Including mixed set sculpts didn’t feel like the right call, given the amount of variability involved.

It also didn’t feel like we were making the most of what we had to work with. Given each core set includes specific monsters, it made sense that the hunters would ‘go with’ those monsters.

So, we made the decision to match the armour and weapons the hunters were carrying with the monsters in their box, to show off the variety of lovely sets which appear in the video game.

Again, we established some guidelines to help with these decisions, with with number 1 being the most important:

We’ll start off with the Ancient Forest set, where the decisions were fairly easy.

Next up was the Rathalos set. Sword & shield felt like a great fit here. An OG armour set and weapon for the original flagship monster!

Lining up the Tobi-Kadachi set with the bow just felt right, given the bow was the best thunder bow until Kulve Taroth weapons were introduced, alongside the constitution which comes on the set (F’s in the chat for mega dash juice — you are sorely missed).

Last but by no means least, that leaves Anjanath. Given dual blades tend to be built around elemental damage, [SPOILER: having the space to slide some extra fire damage in there was a nice fit].

Moving on, we have the Wildspire Waste set.

This is where things get much trickier, simply due to the nature of the weapons you can make from the monsters in this set.

(I’ll note here that the decisions made on monsters and weapons followed the exact same process as the Ancient Forest set.)

Of the four monsters in the Wildspire Waste box, based on the video game, you can craft the following:

However, I quickly realised that wasn’t going to work out.

Because the insect glaive and heavy bowgun both only have Pukei-Pukei and Diablos armour to choose from, putting the charge blade hunter in the Diablos set would’ve meant two hunters in sets from one monster.

After backing and forthing, the conclusion was for the switch axe hunter to have the Barroth set... 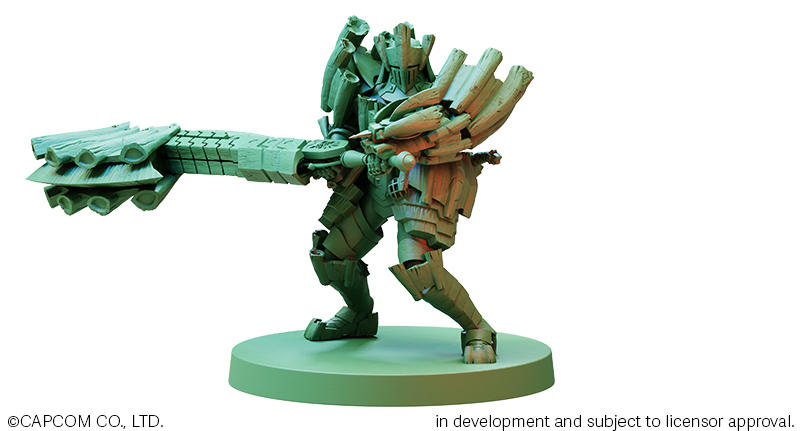 ...and the charge blade hunter to have the Jyuratados set.

That left us with the insect glaive and heavy bowgun hunters, and the Pukei-Pukei and Diablos sets.

Neither of those are gunner sets, which ruled out an easy way to narrow it down. So, I deferred to my own video game experience.

Early in the end game of Monster Hunter: World, when I wasn’t using the Nergigante glaive, I spent a decent amount of time using the Diablos glaive (with a combination of handicraft and protective polish).

Side note that, depending on the glaive you’re using, slugger isn’t a wasted skill. It just wouldn’t land particularly high on the skill priority list for an insect glaive set.

So, the insect glaive hunter was given the Diablos set: 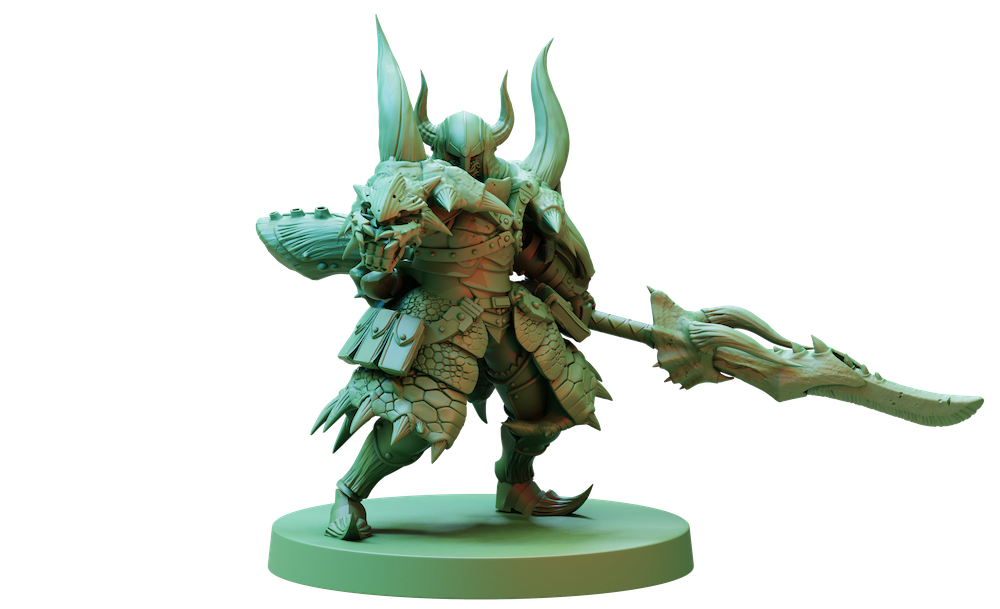 And the Pukei-Pukei weapon and set went to the heavy bowgun hunter:

(Which worked out quite nicely, given these feature in some of the key art used for the weapon.)

And there you go! An awful lot of words to help talk you all through the various decisions made across the project.

This article is in no way intended to try and convince folks that would have rather seen other armour sets represented. With a game as big as Monster Hunter: World, there will always be multiple ways to do things, and we love that you care enough to give us feedback!

Hopefully the above goes some way toward explaining why decisions were made, and showing the thought that went into choices by people who love Monster Hunter just as much as you.

Thanks for reading, and we’ll see you in the Gathering Hub.

Back Now on Kickstarter