Let's see what this Maelstrom Goblin can really do! 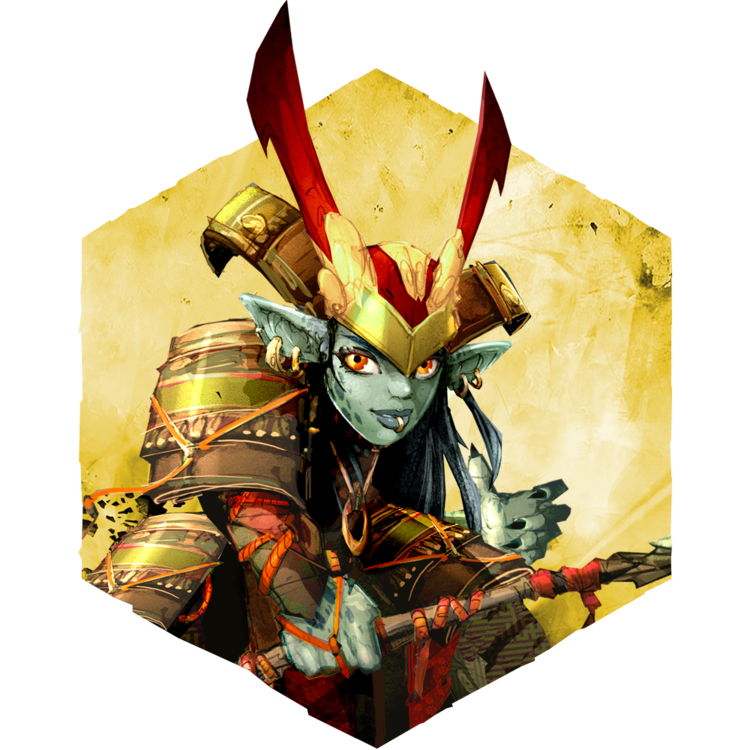 As a goblin, Jeen flips the plot and clash phases on their head, doing most of her work in the plot phase.

But with this unique dynamic comes a balancing act. When playing with Jeen, will you focus on taking out followers, or planting her banner? 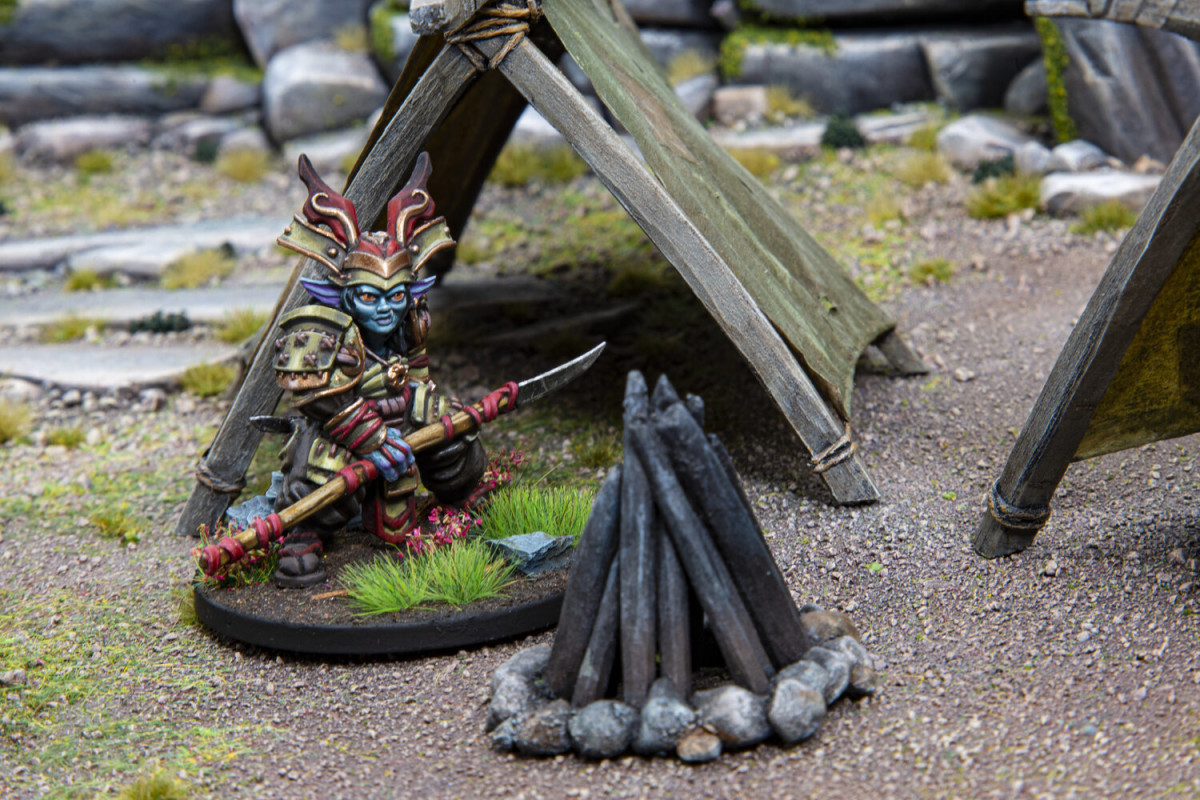 Because she’s a Maelstrom champion, Jeen gets bonus steps on the battle ladder when she knocks out enemy followers.

With a speed of three in the plot phase and one in the clash phase, she’s pretty nimble. And with a protection and dodge of three, she’s not the easiest to knock out, either.

Although, as we see with most Maelstroms, she has pretty low health at just five.

Her health may not be the highest, but Jeen’s stellar defensive stats get a boost whenever she’s hit. With Martial Discipline, she can choose either a dodge or protection boon after taking a wound.

This handy little trait lets Jeen assess the battlefield to figure out whether she needs to pack on protection, or prepare to dodge.

Top Tip: As a goblin, Jeen’ll get most of her work done in the plot phase. Plan accordingly. 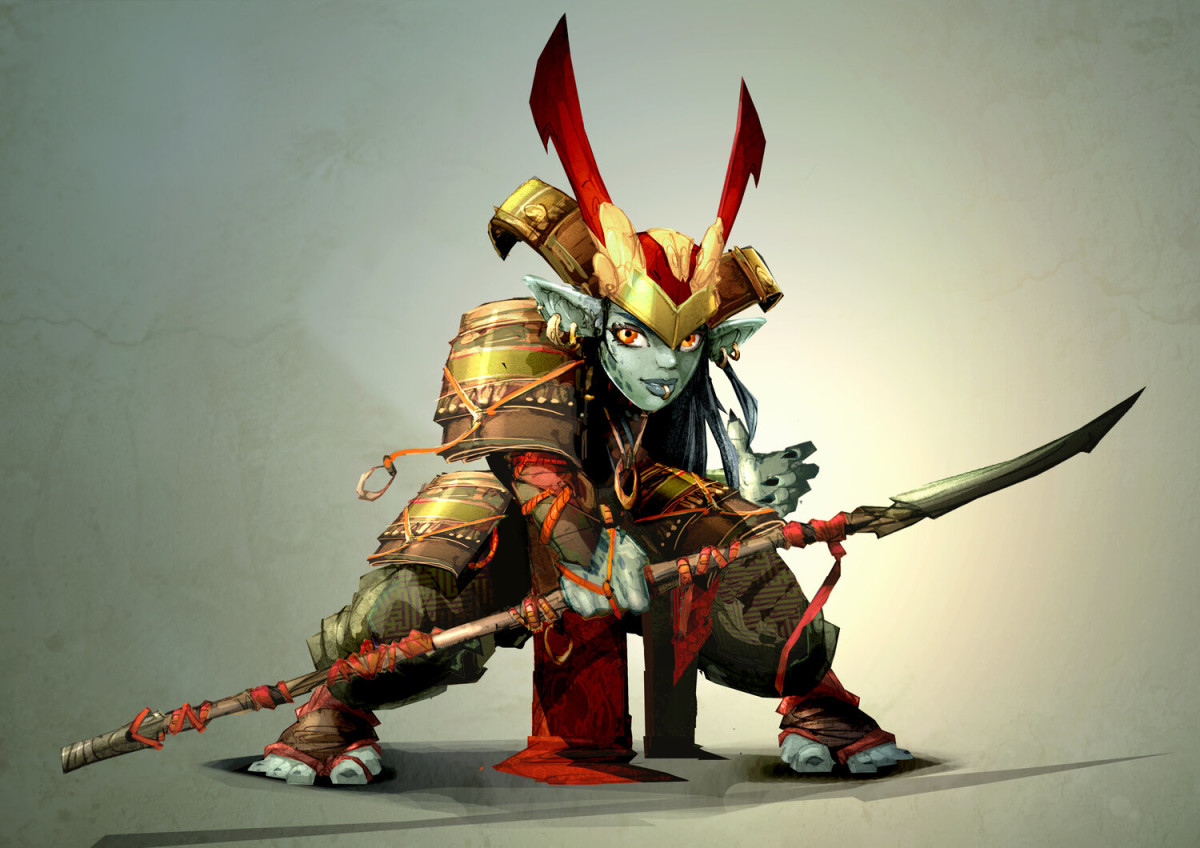 As you’ll see from her skills, which we’ll explore below, Jeen is absolutely lethal with her polearm.

Jeen's Skills in the Plot Phase 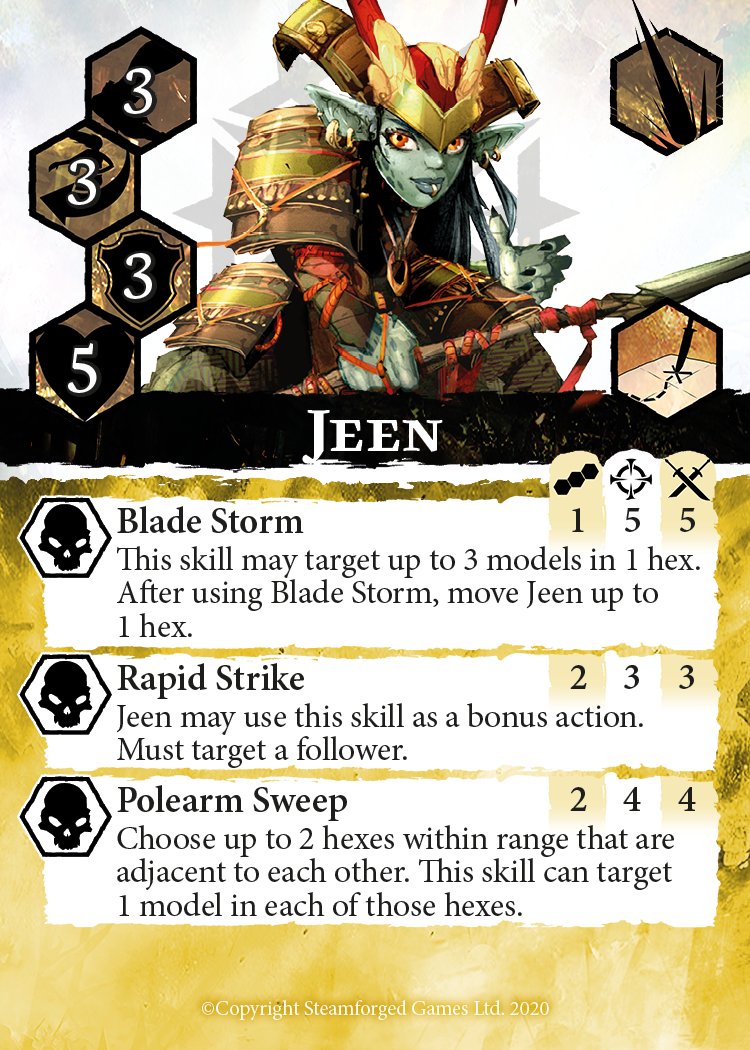 Jeen has three skills to choose from in the plot phase, all designed with the aim of taking out enemy followers and getting early steps on the battle ladder.

Blade Storm can decimate grouped followers and gives Jeen a pip of movement to relocate and find more enemies.

With a range of just one, you’ll likely need to use her advance first to get in range, but don’t fret about the missed opportunity to attack again.

Because Jeen has Rapid Strike, a bonus action she can use to strike at a single follower. It’s range two, so if you’ve already advanced and wiped out enemies with Blade Storm, you can still take a stab at any follower within three hexes.

Finally, if your opponent gets wise to your Blade Storm tricks and starts spreading out their followers, you can still take advantage of the situation with Polearm Sweep.

With this skill, you can threaten followers up to five hexes away from Jeen’s position (and still make use of Rapid Strike).

Top Tip: Jeen has some incredibly useful plot phase skills but, sometimes, your best move will be to simply plant her banner.

Jeen's Skills in the Clash Phase 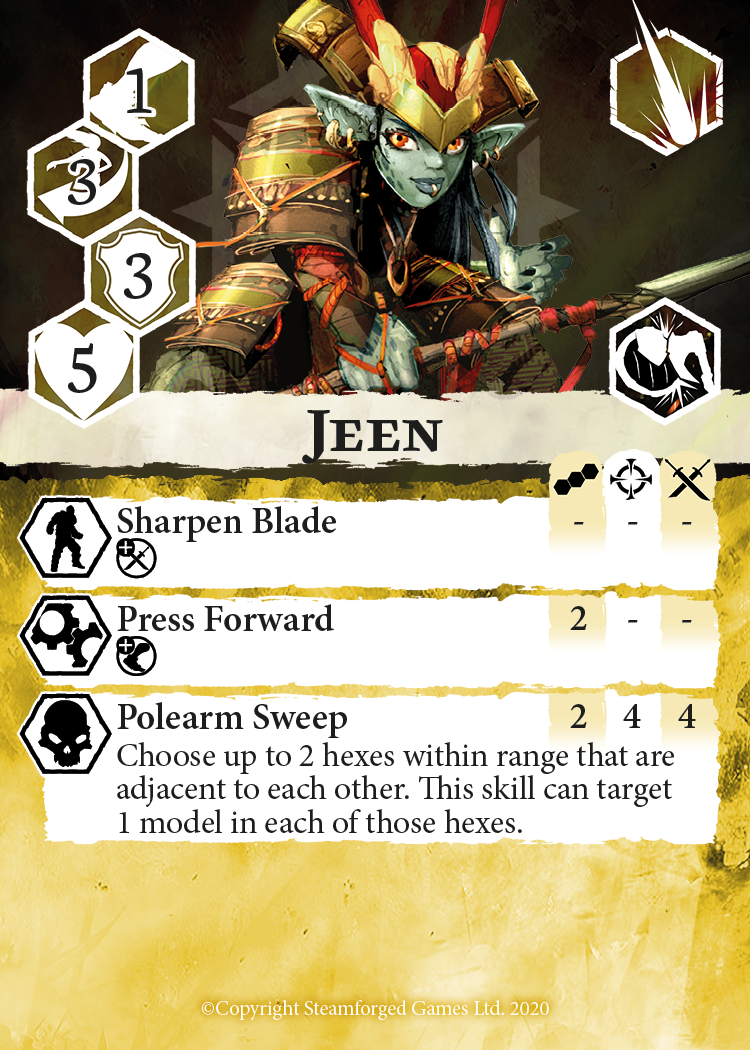 Jeen’s skills in the clash phase are similar to what you’d expect from other champions in the plot phase, as fits her goblin nature.

With her first boon-based skill, Sharpen Blade, she can improve her own damage output.

Press Forward is more generous, letting Jeen improve her speed or the speed of her allies—useful for catching your opponent by surprise and crushing their banner with a sudden burst of speed!

Finally, Polearm Sweep makes a comeback from the plot phase, allowing Jeen to put pressure on enemy followers in both phases.

Top Tip: Use Jeen’s clash phase abilities to prepare for your next turn. 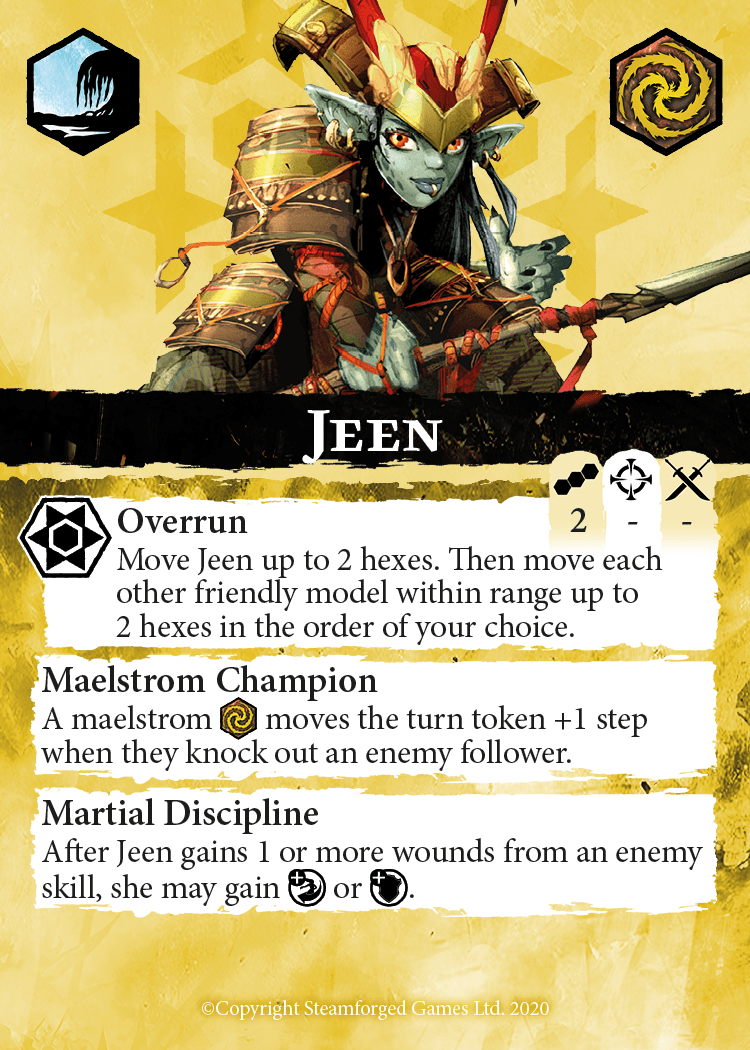 Whoa—what an ultimate! Overrun gives Jeen and her allies the ability to totally reposition on the battlefield.

As you can imagine, there are tons of ways you could use this. You’ll need to figure out what works for your situation, but there’s one obvious call: use it on turn one to catapult your warband forward, gaining a strong position on the objective hexes for future turns.

Top Tip: Use Overrun any time in the game to gain serious advantage.

Golden Shrikes in the Plot Phase 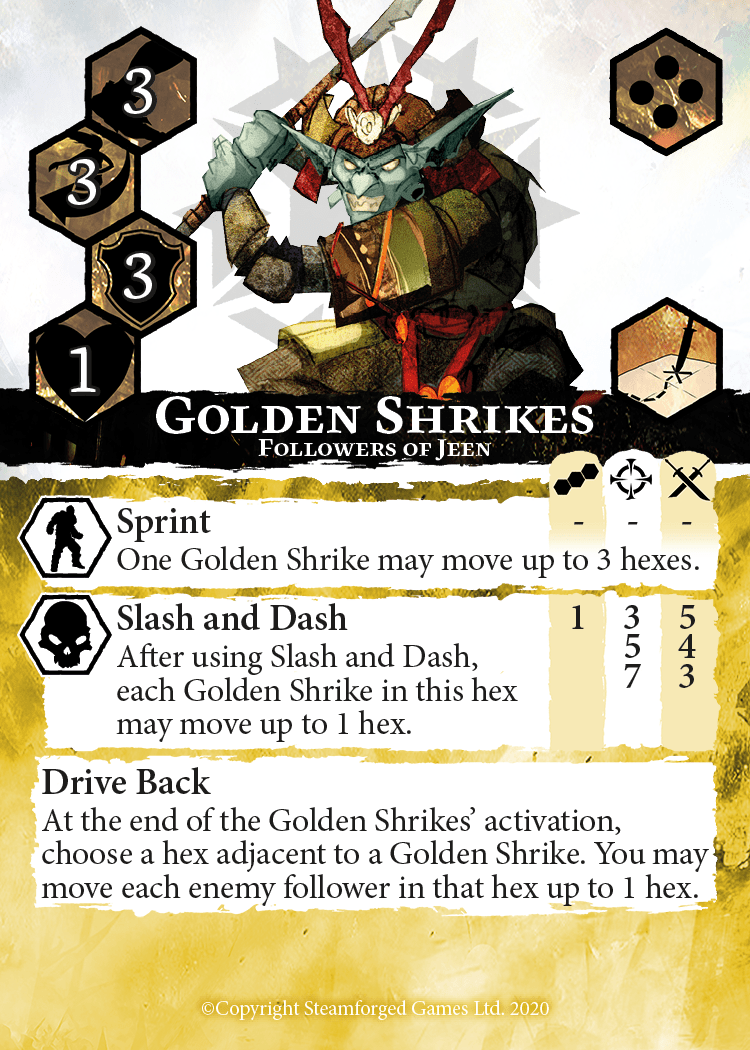 Jeen’s followers are defensively solid, and follow Jeen’s lead with speed three and one in the plot and clash phases respectively.

On the face of it, Sprint doesn’t feel like a particularly strong skill. But when coupled with Drive Back, it can become a useful disruptive ability.

Slash and Dash, on the other hand, follows the typical goblin archetype of being accurate-but-less-damaging when more followers are present, and vice versa. The added benefit is that each Golden Shrike in the chosen hex may make a move to relocate.

Top Tip: Use Drive Back to push enemy followers into Jeen’s range!

Golden Shrikes in the Clash Phase 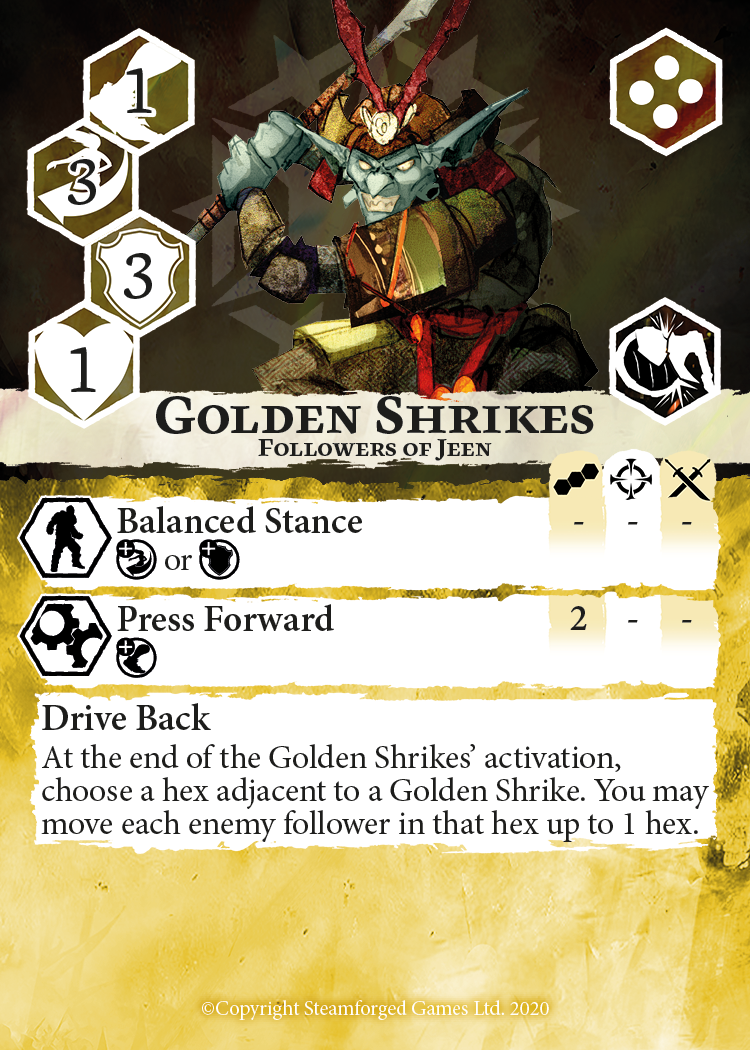 During the clash phase, the Golden Shrikes have a move stat of just one. Like Jeen, they can boost it with Press Forward.

(This group’s potential to give two speed boons should not be overlooked when constructing your warband!)

The Golden Shrikes’ second skill, Balanced Stance, gives them a dodge or protection boon. It’s perfect for keeping that eager Shrike who Sprinted ahead safe throughout the clash phase.

Top Tip: Use Drive Back to clear a path for your champions if enemy followers are fencing off a banner. 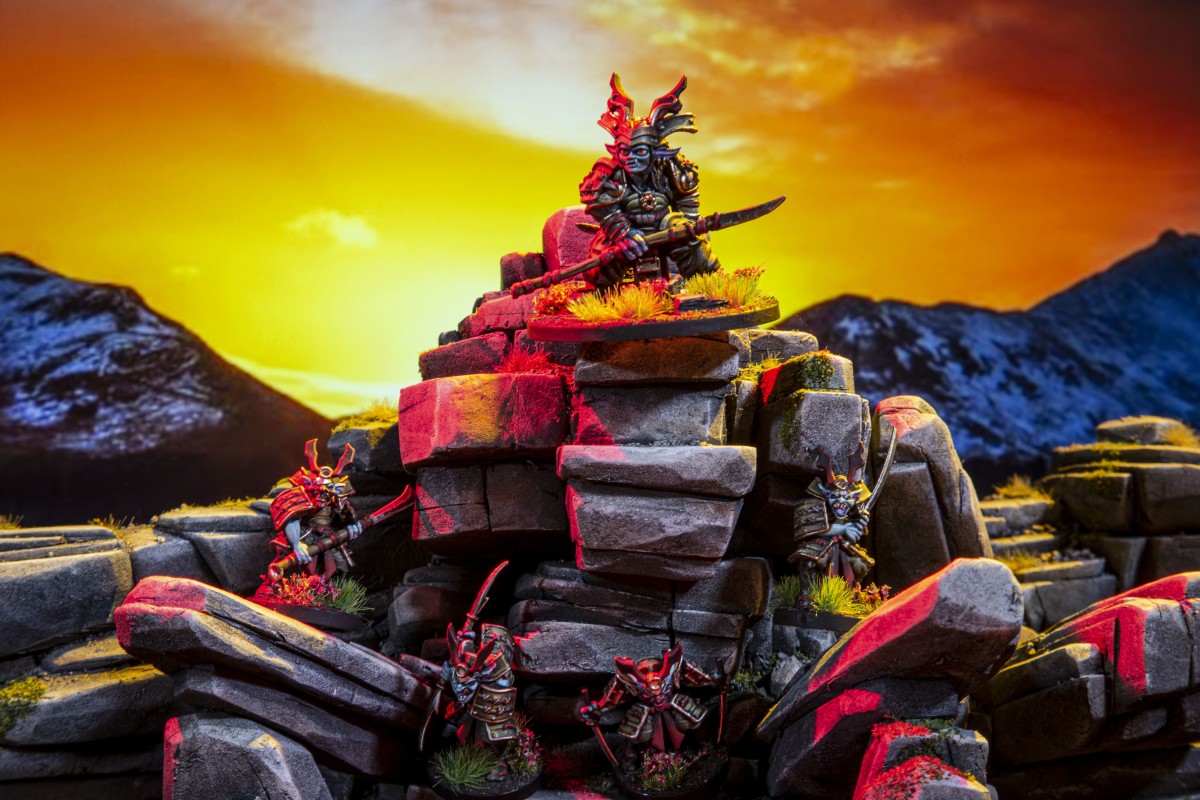 Use the clash phase to prepare for the plot phase: Jeen and the Golden Shrikes can set up their upcoming turns by boosting their speed, giving them a staggering advance of four hexes and allowing Jeen to pose a threat from up to six hexes away!

Use Jeen’s Range: Jeen can attack from two hexes away. Exploit clever positioning so you don’t have to advance as often.

Pick champions that synergise: Jeen’s attacks are reasonably accurate for attacking followers. If you pick a champion that can give her accuracy boons, you’ll be reaping those steps on the battle ladder!