Let's take a crack at this electric Maelstrom champion!

Find out how to use Luella's skills, followers, and ultimate. 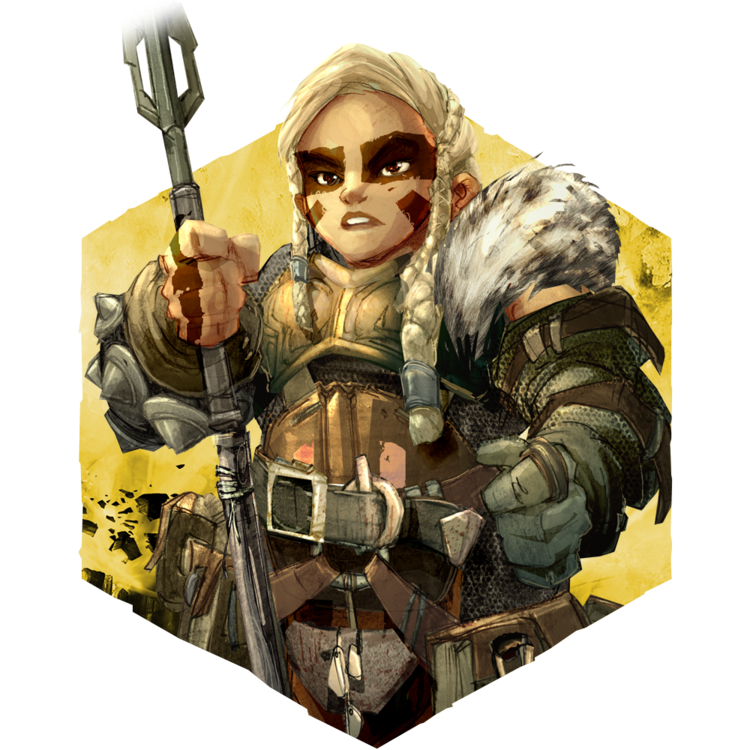 If you were along for the Godtear Kickstarter back in 2018 (and have a curious mind) you might have spotted Luella teased on the retail pledge page.

Now, she’s riding the lightning right to your tabletop, and she’s ready to cause mayhem!

Let’s check out her cards. 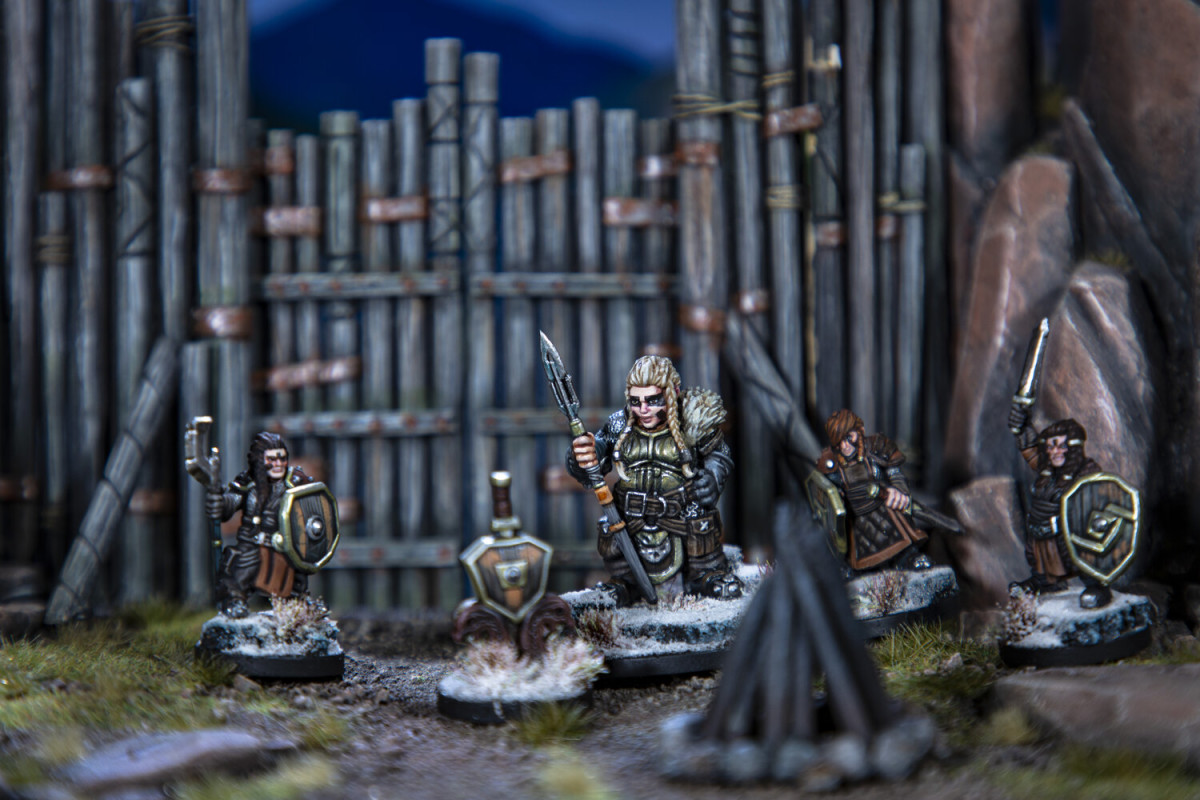 Because she’s a Maelstrom champion, Luella gets bonus steps on the battle ladder when she knocks out enemy followers.

With a speed of one in the plot phase and two in the clash phase, she’s got the usual dwarf statline we’ve come to expect after Rhodri and Nia.

In line with her dwarvish resilience comes a low dodge value, high protection, and a VERY high health pool (especially for a Maelstrom—something Jeen will no doubt be jealous about!). 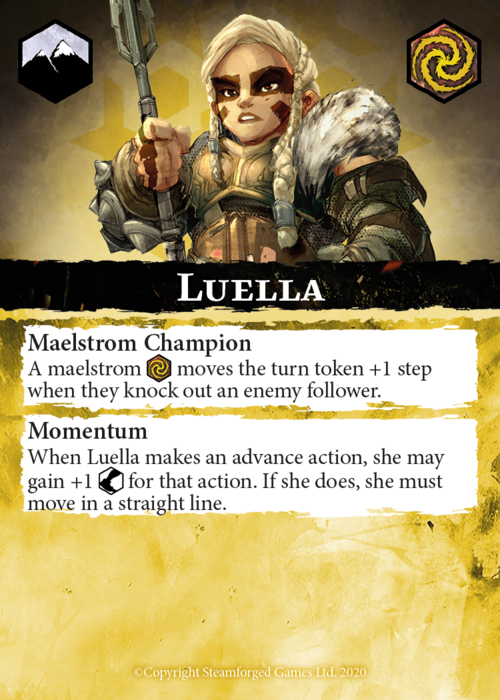 Right away, we can see some exciting stuff on Luella’s trait card.

Momentum increases Luella’s speed by one when she moves in a straight line. Remember that, because it’s important later!

Top Tip: With her BIG health pool, Luella lives for the scrum. 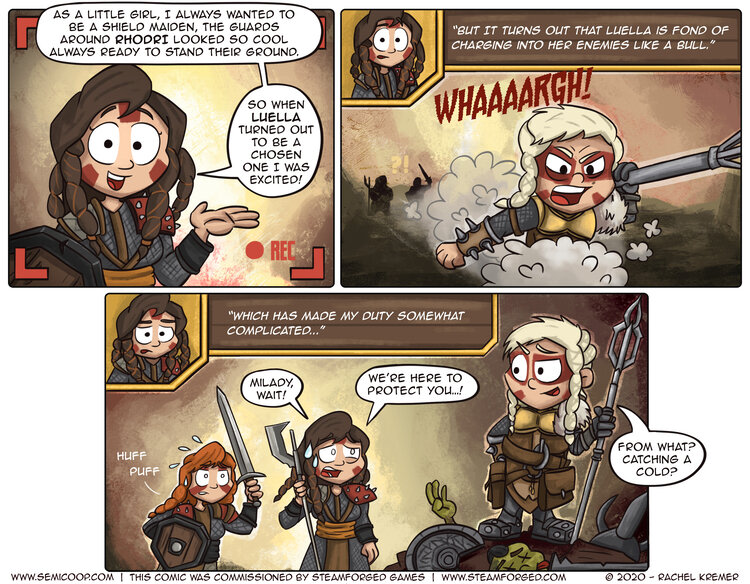 Luella is deceptively fast. You’ll want to take advantage of her speed whenever you can.

On the flipside, it does make it tough for her shieldmaidens to protect her when she’s always charging ahead.

Luella Skills in the Plot Phase 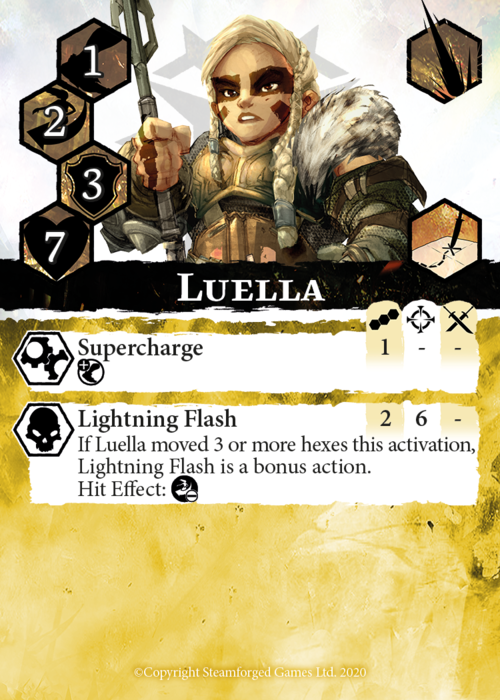 Luella has just two skills to choose from in the plot phase. However, you can use both and move if you wish!

Supercharge provides a speed boon to Luella or an ally within one hex. Use this and advance in a straight line to trigger Momentum, giving you a move of three, which...

...allows you to use Lightning Flash as a bonus action!

Lightning Flash has a range of two hexes and is pretty accurate, rolling six Godtear dice.

On a successful hit you’ll apply a dodge blight; perfect for setting up your clash phase.

Top Tip: Luella likes to go last in a turn so she can set up multiple targets for the clash phase.

Luella Skills in the Clash Phase 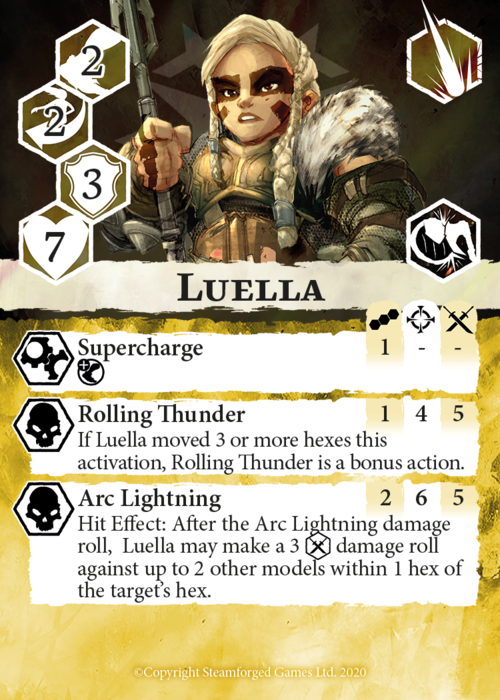 The clash phase is where we see Luella’s Maelstrom nature really come into play. Get ready for the storm!

Firstly, her speed increases to two, which means that with Momentum, we’re hitting that sweet three moves to unlock bonus actions!

Our bonus action this time is Rolling Thunder, which lets Luella target a single opponent with a respectable attack. Hey, if it’s free, you can’t complain.

Luella’s ‘big’ attack calls the lightning of her storm to target a single enemy with a strong attack. If you hit, it arcs out, hitting two more models adjacent to the first!

A good use of this is to target a low dodge model so the lightning scatters, catching that model (or models) that are harder to hit.

Finally, Supercharge makes another appearance. Now, with a clever use of Supercharge you can have Luella move three in the following plot phase, plant her banner, and use Lightning Flash.

Top Tip: Luella’s bonus actions can be triggered by other champion’s move effects on her, just as long as it’s a straight line... 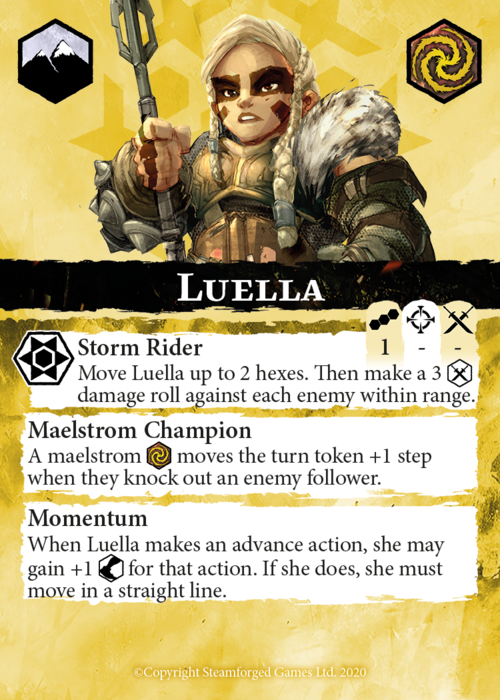 Well, if there was ever any doubt Luella likes to be in the thick of it, this should put that to rest.

Storm Rider gives Luella the ability to move two hexes (that count towards bonus action movement). And THEN, every enemy adjacent to her suffers a three Godtear dice damage roll!

Yeah, you read correctly: it completely bypasses dodge. So, if there’s a scrum over the objective hexes, this is bound to clear the area.

Top Tip: If you can move Luella one hex with another champion before her activation, it can make for a truly earth-shattering turn! 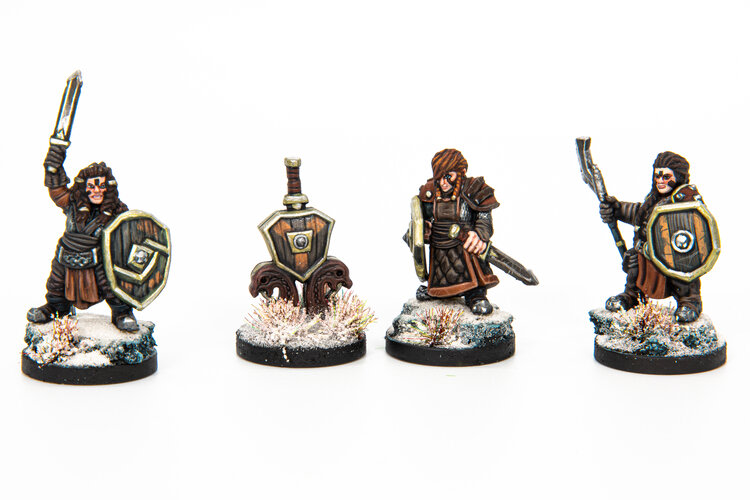 Luella’s Shield Maidens are sworn to defend her in battle. So, naturally, she gets a defensive bonus whenever they’re around her—although that’s easier said than done!

With the Protective trait, Luella gets a protection boon whenever a Shield Maiden is adjacent to her at the end of their activation.

It’s also important to note that Luella is the first Maelstrom with only three followers, making her an interesting choice if your opponent likes Maelstroms.

Shield Maidens in the Plot Phase 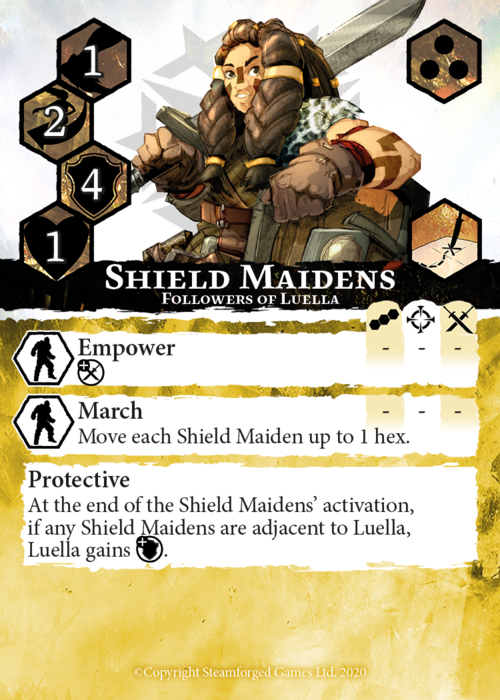 Although the Shield Maidens match Luella for speed, they’ll need to March to catch up if she’s used Momentum to rush ahead.

Their second skill, Empower, gives the Shield Maidens a damage boon. This can be put to great use in the clash phase or, if you’re running Nia, there’s the option to Crystal Mirror this boon onto Luella.

Shield Maidens in the Clash Phase 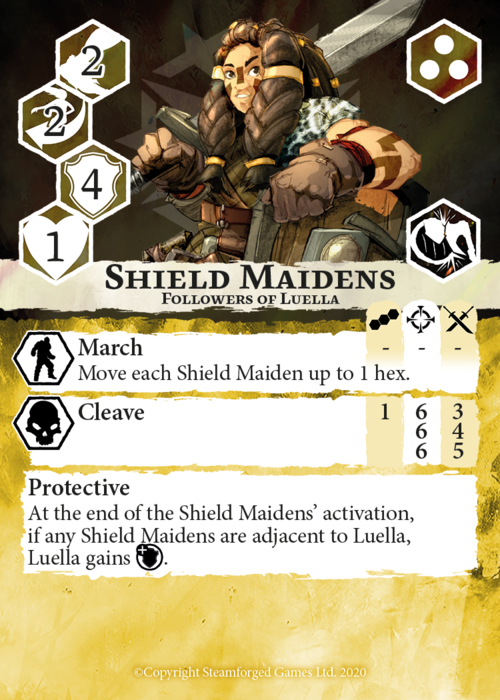 During the clash phase, if the Shield Maidens are grouped on the same hex they can take full advantage of Cleave to wield an accurate (and damaging) attack, made better by Empower from the previous phase.

Once again, March will let the Shield Maidens catch up with Luella to apply that protective boon.

Top Tip: Even when split up, the Shield Maiden’s attacks are deadly!

Plan your turns. Luella’s action economy is great when she can move three hexes in a straight line, but it does make her turns predictable. So, you’ll need to try to line up at least two targets for the clash phase.

Flex into targeting champions. Luella’s attacks are on par with some Slayers. Throwing an Arc Lightning into an injured champion may net you four battle ladder steps, instead of two for a follower!

Pick champions that can move Luella out of sequence. For example, Titus’ Glory Seekers give you the ability to move a champion one hex in the plot phase. This would let Luella Advance, trigger Momentum, have moved three hexes in a straight line to trigger Lightning Flash and THEN, for her second action, plant her banner. Not bad for plot phase activation!