Master death with Styx, Lord of Hounds! Let’s check out how this Godtear champion shapes up on the battlefield, and how you could use him in your warband. 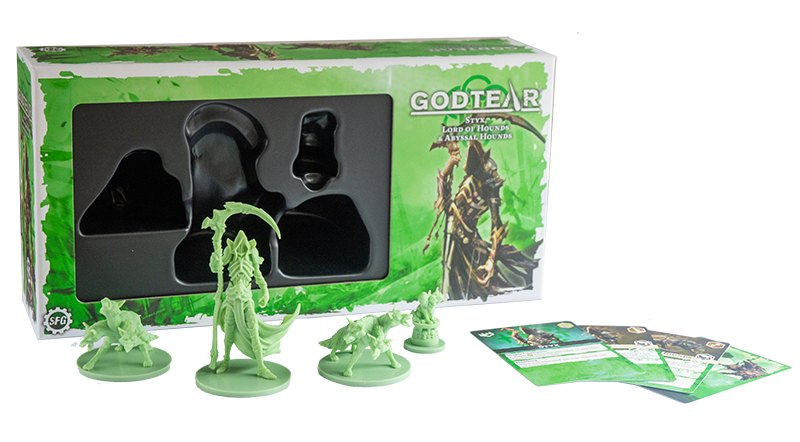 (New to Godtear? Check out the beginner’s guide.)

One of four revenants in Godtear, Styx (Shaper) joins Mournblade (Guardian), Morrigan (Slayer), and Grimgut (Maelstrom) to round out the undead champion ranks.

You know what that means:  it’s revenant Godtear warband time!

One of the most interesting parts of Godtear is how many options you have when it comes to building your warband. Your warband can have up to three champions (and their followers), and that’s the only rule.

With 21 potential champions for you to recruit (so far...), there are a bunch of potential compositions you could explore. You could try an all-dwarf warband featuring the likes of Luella, Maxen, and Nia, or a fiery alliance with Keera, Maxen, and Blackjaw.

Now Styx is on the scene, the smart cookies among you will have noticed that with a revenant of every class, you could play an entirely undead warband and visit the full wrath of the grave upon your unwitting enemies.

Cool, right? (Or should that be ‘chilling’?)

If you do go the undead route, it’s worth noting that Styx is something of a maverick. Not one for attending champion mixer socials, he’d rather hang out with his Abyssal Hounds. 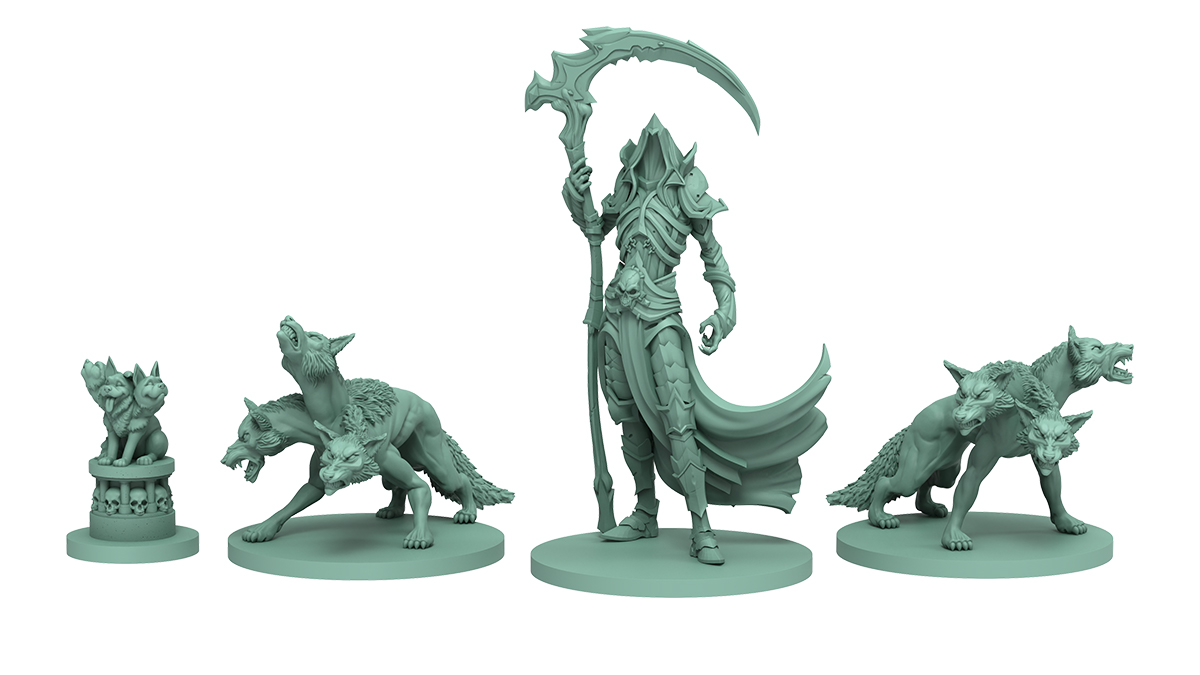 And you can’t really blame him. Those hounds are effective allies, trained to hunt down banners and foes alike. In fact, they’re the first (and only) Godtear followers capable of removing enemy banners from the battlefield by tearing them to shreds. Not a bad trick!

Now, let’s see what else Styx has up his sleeves...

Because he’s a Shaper champion, Styx gains a bonus step on the battle ladder each time he plants his banner. (The rules lawyers among you would call that ‘making a claim action’.)

His speed is in line with what we've come to expect from a human — even one as warped as this — being 2 in the Plot Phase, and 2 in the Clash Phase.

More notable is his health. With a health value of just 6, it looks like this revenant is closer to death than he’d probably like to be. Styx would be better off avoiding hits if he can help it. 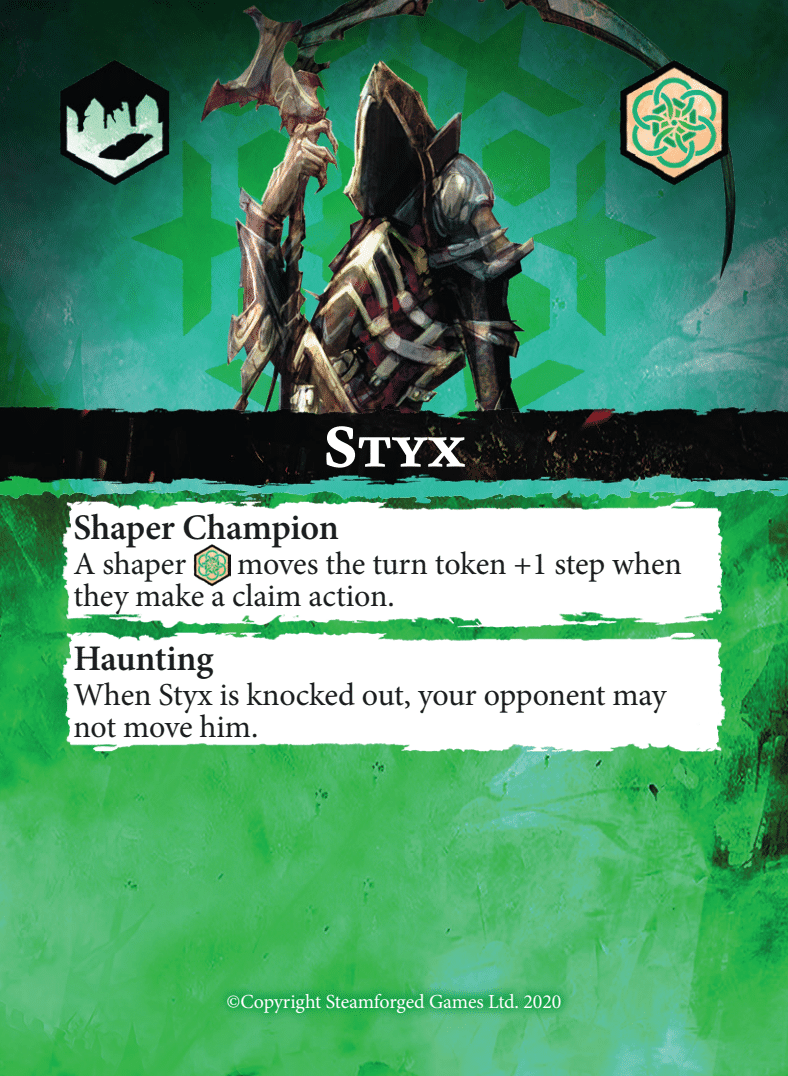 Lucky for you, Styx has a trick or two up his sleeve if he does take a hit. With his enormous scythe and hood, he’s got a look of a certain well-known figure with power over death.

Such is Styx’s power that even when he’s knocked out (“dead”, for all intents and purposes), your opponent can’t move him.

You see, in normal play, when an opponent knocks out your champion, they have the opportunity to move that champion up to two hexes — usually to an awkward position, forcing you to spend a movement action when your champion revives (rallies) to get them back where you need them to be.

(Given you’ve only got two actions per champion in a phase, and rallying also costs an action, getting knocked out is an expensive business.)

Styx’s ‘Haunting’ trait keeps him haunting the hex where he was knocked out. So, when he rallies, he’ll be exactly where you left him, ready to wreak havoc with that precious second action!

Top Tip: If you think Styx will be knocked out, leave him in a position where he can rally and have a useful second action in the same turn.

Being a Shaper crew, you’ll find Styx and his hounds like to move things around — and they’re not picky about what. Friendlies, enemies, and objective hexes are all fair game. 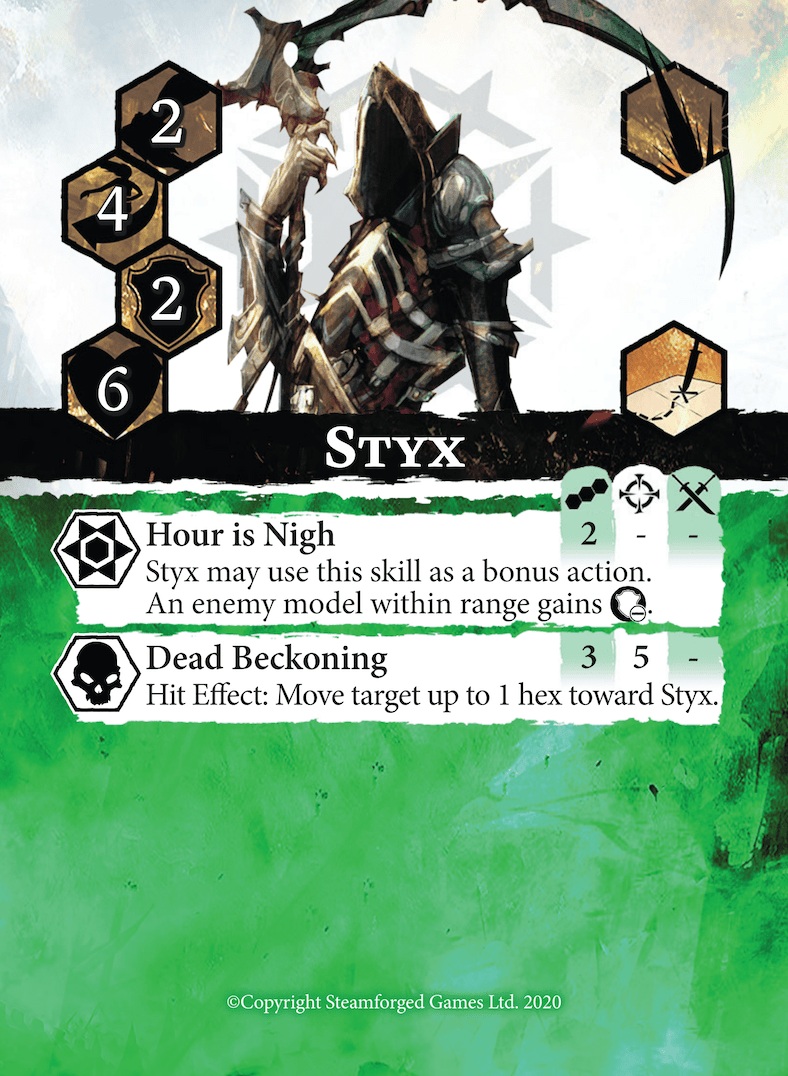 ‘Hour is Nigh’ can be used as a bonus action, which means you can use it to squeeze an extra action into a single turn. With this chilling skill, Styx turns his spectral attention toward his next target and marks them for death with a protection blight.

A more active skill, ‘Dead Beckoning’ is excellent for pulling enemy champions out of position — perhaps even straight onto the waiting blades of another one of your other champions?

Top Tip: Unlike most Shapers, Styx is at home close to a melee where he can manipulate the combat at close range. 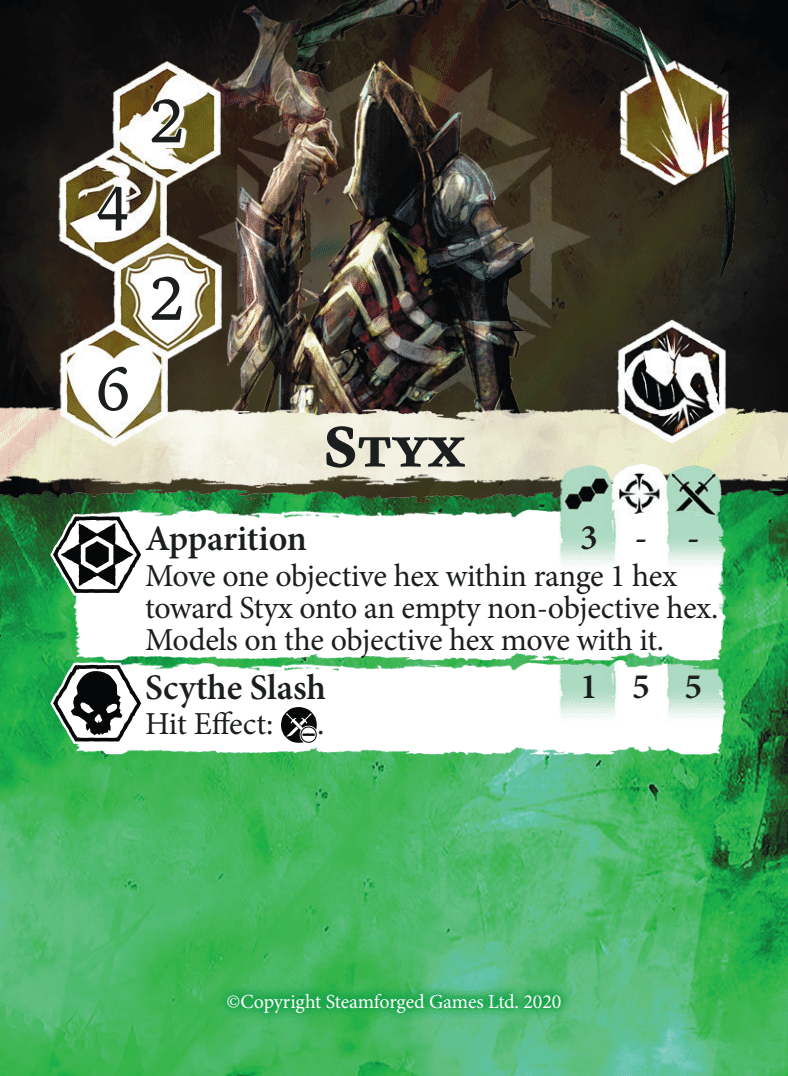 Now we enter the Clash Phase! Styx reaches out with skeletal fingers, reshaping the battlefield to his whim.

To start with, ‘Apparition’ is a simple skill with a lot of possible uses. With it, Styx can draw an objective hex closer to himself — and if someone, or something, is standing on that hex, they’re coming along for the ride.

With ‘Apparition’, you could move an objective hex with a banner planted on it closer to you, either to make that banner easier to crush (if it belongs to an enemy), or, if it’s a friendly banner, to protect it from harm. You could bring an enemy champion closer, or draw a friendly champion out of danger.

Or, you could be thinking ahead, and move an empty objective hex to a more convenient position ready to plant your banner in the next Plot Phase.

In short, anything on an objective hex needs to be wary if Styx is nearby.

Next up, ‘Scythe Slash’ has reasonable accuracy and damage for a Shaper attack. To add insult to injury, it’ll hit your unwilling victim with a damage blight, blunting any retaliation.

Top Tip: Line up ‘Scythe Slash’ after using ‘Hour is Nigh’ in the Plot Phase to deal some serious damage!

Even so, being a Shaper, don’t expect Styx to dominate the battlefield by knocking out champions. Not with ‘Scythe Slash’, anyway... 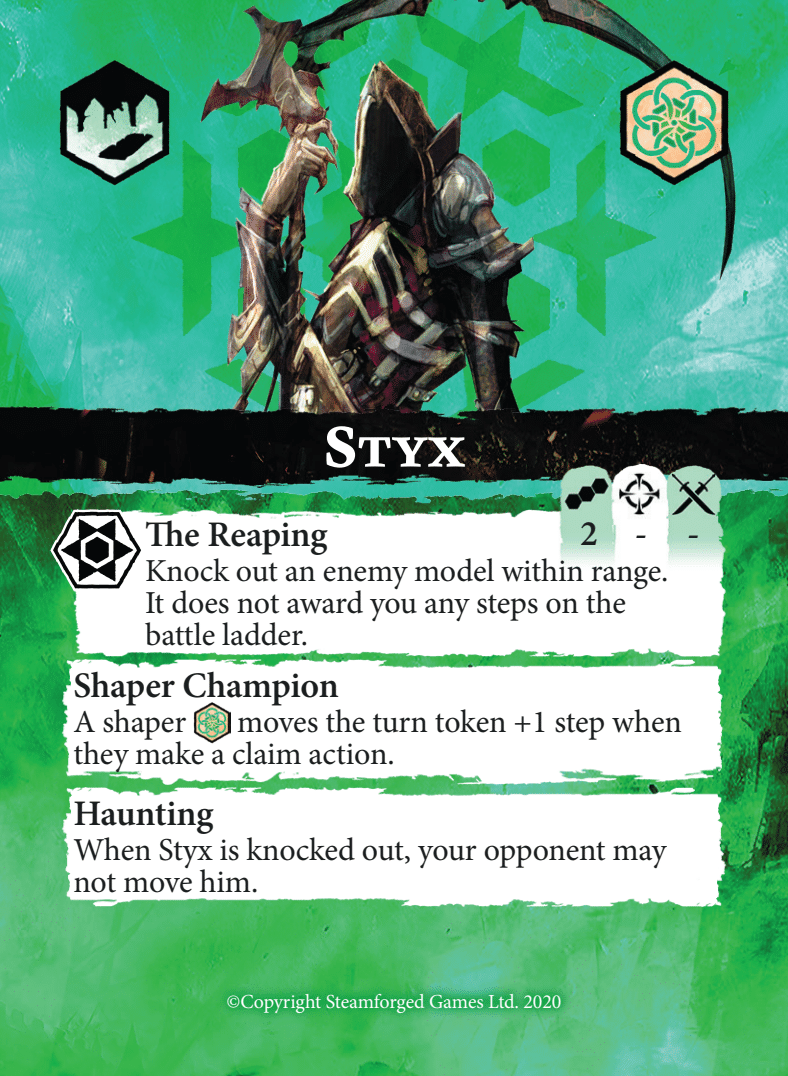 Imagine snapping your fingers and the enemy champion causing you the most grief just falls over?

That’s what Styx can do.

It may seem strange, at first, that ‘The Reaping’ doesn’t grant any steps on the battle ladder. But that’s not what this Ultimate Skill is for.

See, knocking out enemy champions isn’t just about steps. It has a host of other useful effects, not the least of which is moving them two hexes into an awkward position — the exact irritation that Styx’s ‘Haunting’ trait helps him avoid.

As we covered earlier, the combination of being knocked out, moved, and then having to use two actions to rally and reposition can seriously hamper an enemy champion’s turn.

Unleash ‘The Reaping’ at the right moment and it has the potential to swing a whole game from defeat to victory. That game-winning turn your opponent was about to take? Well, now that champion’s going to spend the turn rallying instead!

Better still, it doesn’t matter how difficult the champion is to knock out. Rhodri? Sneaky Peet? Helena? Even the most resilient champions can’t escape ‘The Reaping’!

Top Tip: If in doubt, use ‘The Reaping’ on your opponent’s most dangerous champion at the end of the Plot Phase or the beginning of the Clash Phase on turn 3. This tends to be when people are lining up their biggest weapons ready to claim the game. 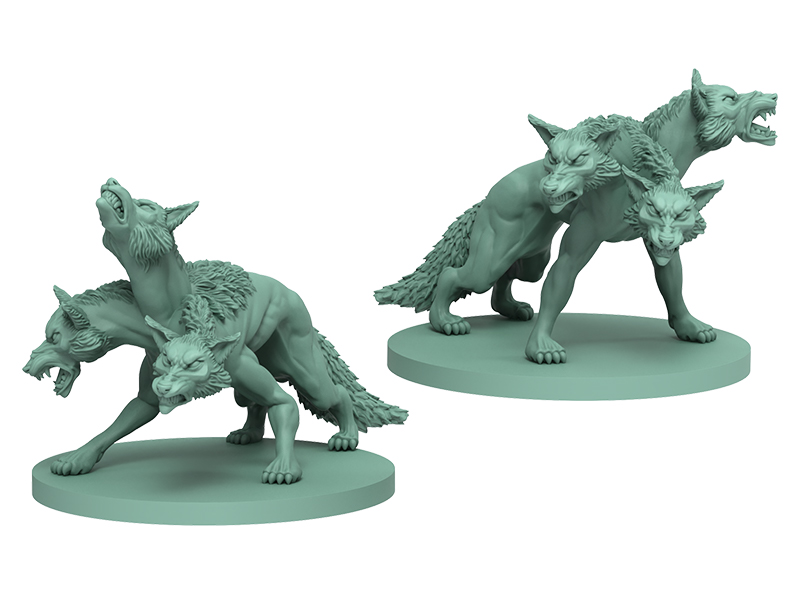 So, Styx is about controlling the battlefield and blunting enemy champions. But how do his hounds help?

Abyssal Hounds in the Plot Phase 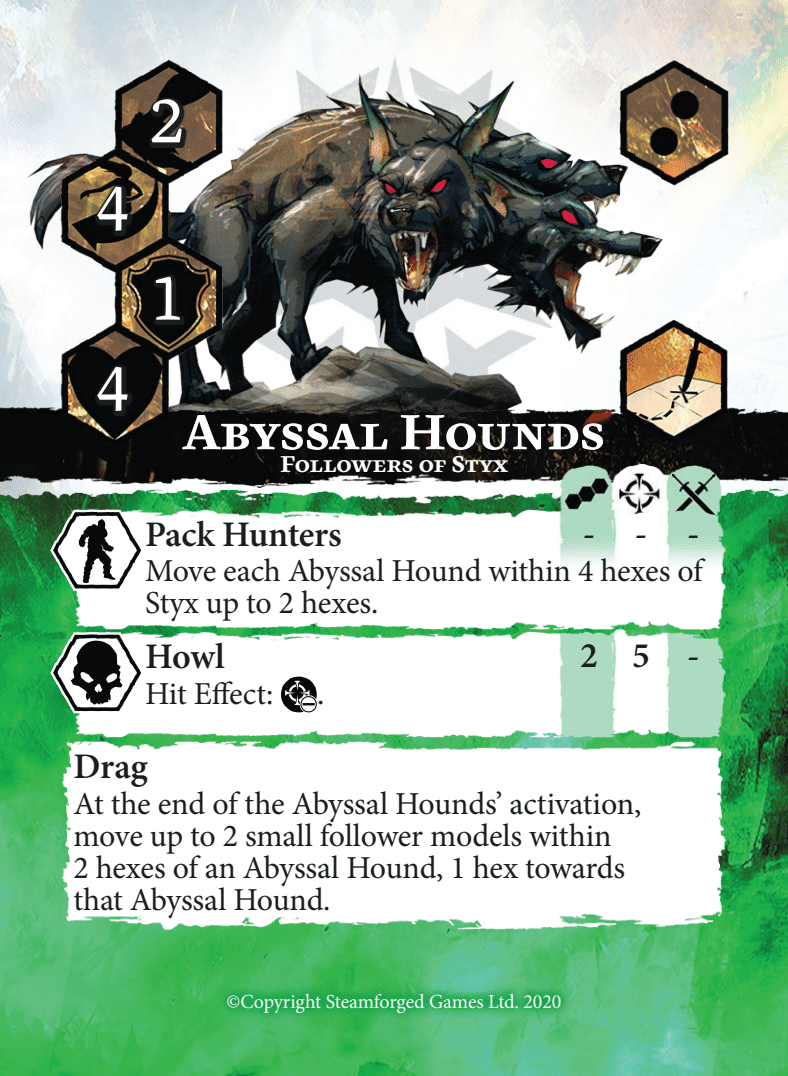 To start with, being large followers (like Keera’s dragons), Abyssal Hounds each have 4 health as well as a respectable dodge 4 and protection 1.

It’ll often take at least two damaging-dealing attacks to knock out just one of the hounds. This makes them pretty good at blocking enemy movement just by sitting in the way, seeing as your enemies will actually need to take them out if they want to move through a hex a hound is currently in. (You know when your oversized dog is sitting on the TV remote and won’t get up? It’s kind of like that, except these are slavering hell hounds that are blocking your path to the godtears. And will probably bite your hand off if you give them a shove.)

They’re fast, too. By using ‘Pack Hunters’, the hounds can move up to 2 extra hexes in addition to the 2 speed they already have — handy for getting into position for the Clash Phase!

And that’s not all. With Styx and his Abyssal Hounds both being dodge 4, ‘Howl’ing at your enemies to stick them with an accuracy blight will often be enough to make them miss next time they try to attack.

Finally, when we said these Shaper champions like to shape the battlefield, we weren’t kidding. The Abyssal Hounds can use their trait, ‘Drag’, to drag other miniatures around the board.

True, ‘Drag’ can only be used on small followers, but you do get to move two of them at once, and it can be used on friends or enemies. Not only that, but you don’t even need to roll to see if it works; you can just do it. These dogs don’t need dice to sink their teeth in!

‘Drag’ is especially handy for shifting those more difficult followers out of the way, like Luella’s Shield Maidens or Rhodri’s Household Guard.

Or, if those followers happen to be on your side this time around, use ‘Drag’ to pull them to an ideal hex to block your enemy’s path.

Abyssal Hounds in the Clash Phase 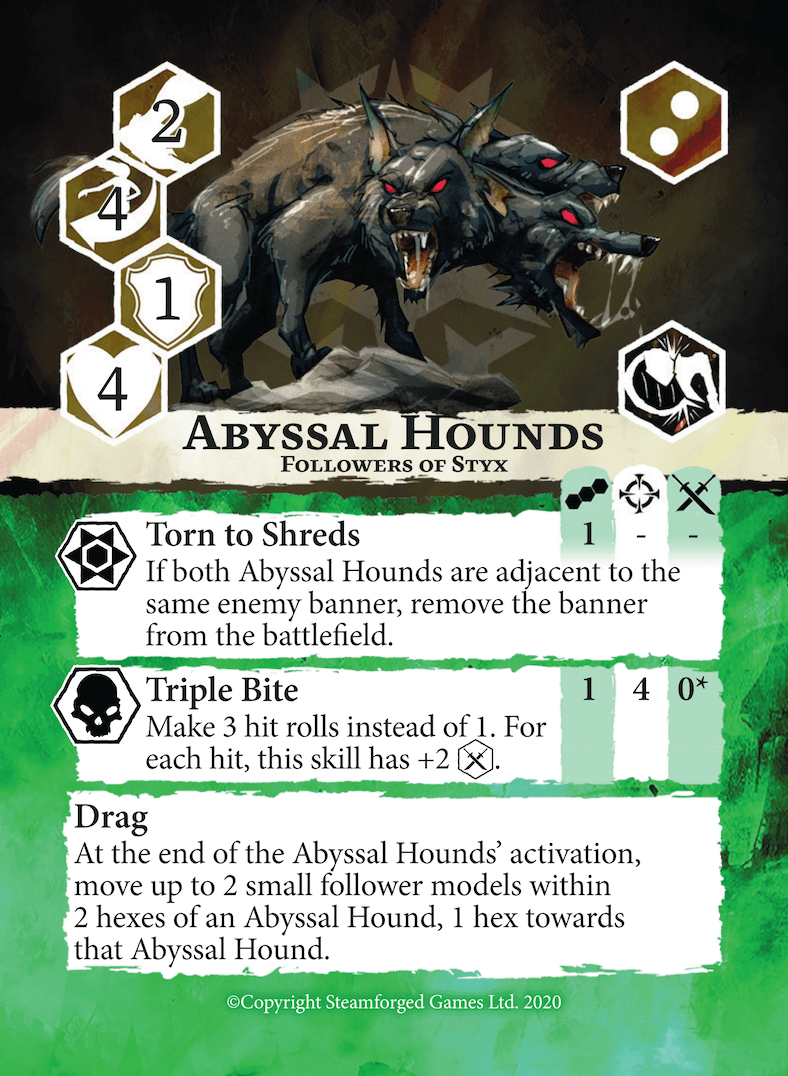 In the Clash Phase, the most iconic skill on the Abyssal Hounds’ card comes into play: ‘Torn to Shreds’.

With this game-changing skill, the Abyssal Hounds can do something no other Godtear follower can do: remove banners from the battlefield.

Being a Shaper, Styx’s specialities are battlefield manipulation and controlling banner placement. The hounds take that to the next level by giving your warband another way to remove enemy banners (outside of the usual ‘crushed by an enemy champion’ approach).

Even if the Abyssal Hounds never manage to remove a banner, their mere presence on the battlefield will force your enemies to think carefully about when and where to plant theirs — just in case the hounds start feeling hungry.

Speaking of hunger, ‘Triple Bite’ can really take a chunk out of whoever gets caught in the hounds’ teeth. With every successful bite (hit), the hounds roll more dice in the damage roll. Ouch!

Because ‘Triple Bite’ has an accuracy stat of 4, it’s best used on champions with a dodge of 2 or 3.

Top Tip: Use Styx’s ‘Apparition’ to move an objective hex with an enemy banner on it closer to the Abyssal Hounds, then let the hounds loose with ‘Torn to Shreds’!

Tips and Tricks for Styx

All About That Base: With Styx, Keera, and Shayle, it’s now possible to create a warband featuring only large followers. Imagine the terror you’ll inflict on your opponents when you roll up with a giant entourage in tow.

Ranged Control: Styx can alleviate Lorsann’s biggest weakness by keeping enemy champions from closing the distance with her. Imagine having an enemy champion caught between Styx and Lorsann. They’d desperately want to reach the Lorsann, the Slayer, to put an end to her hail of arrows, only to be dragged back and neutralised by Styx.

Revenant Alliance: Grimgut is an excellent pairing with Styx. With Styx’s capacity to control the battlefield and knock out a key enemy champion at will, Grimgut can surround them with Wretchlings and give them a very hard time returning to the battle. Styx would also seriously benefit from Grimgut’s access to movement boons.

Banner Time: Another revenant pairing with Mournblade would see these champions dominate the race to put down banners in the most difficult-to-reach places. Think about it: you’d have a combination of ranged banner placement from Mournblade, mobile objective hexes with Styx, and extra threat to enemy banners from the Abyssal Hounds. Also, just imagine how you could use ‘Drag’ on Mournblade’s Nightshades to get them into the perfect position to hamstring your opponent’s movements!

Recruit Styx for Your Warband

Like the sound of Styx? You can add this revenant champion to your warband now using the button below: