What to Expect from the Thunderjaw Expansion | Horizon Zero Dawn: The Board Game

Update 22 July 2021: The Thunderjaw Expansion is now available to pre-order! Check it out here.

The Thunderjaw Expansion is on the horizon! Pre-orders for this huge, combat class machine will open VERY soon; the first in a series of expansions rolling out this year.

Wondering whether the Thunderjaw is worth shelling out your hard-earned shards? You’re in the right place.

In today’s post, we take a look at how the Thunderjaw works in the board game, and what it’ll add to your Horizon Zero Dawn™ board game campaigns.

Thunderjaw in the Board Game

The Thunderjaw is one of the coolest and most iconic machines in Horizon Zero Dawn. As you’d expect, it’s also one of the toughest to beat.

In a 1-2 player game, the Thunderjaw has a hit point value of 50, which scales up to 60 in 3-4 player games. That’s MUCH higher than any of the smaller machines in the game, and worthy of a machine of Thunderjaw’s massive size and stature.

Not impressed yet? Check this out:

The Thunderjaw also has six removable components, each of which have tear values between 8 and 12 of their own. 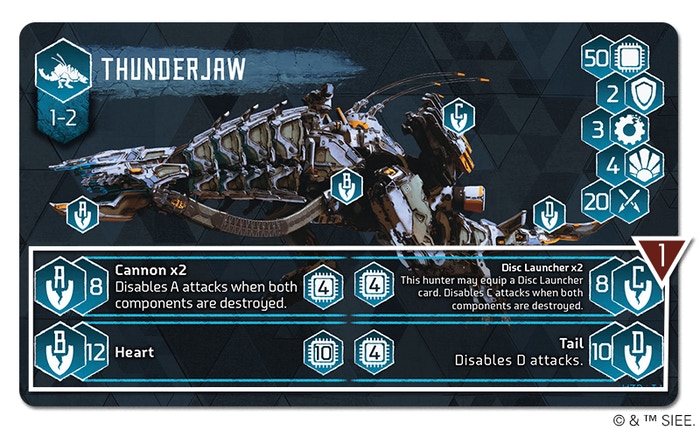 Sound like a lot to chew through? It is. Especially when there’s a huge machine rampaging around.

Speaking of rampaging, let’s look at how the Thunderjaw behaves on the tabletop.

The smaller machines have a single behaviour card with a variety of actions the machine can perform, depending on their condition and surroundings.

Larger machines take this a step further with behaviour decks. Instead of a single card, the machine has a deck of cards you’ll draw from each time it activates. 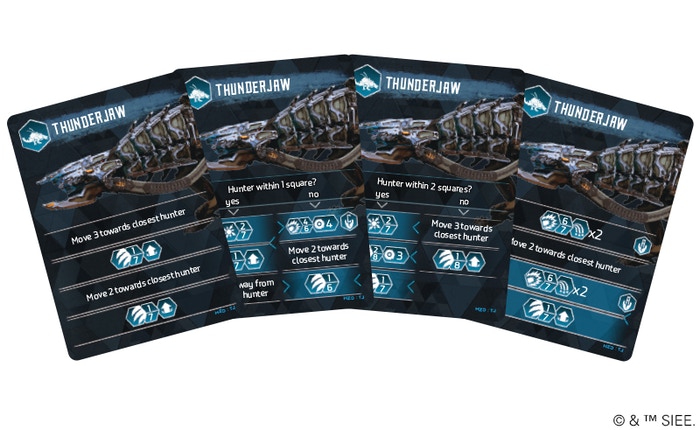 The Thunderjaw comes with a deck of eight behaviour cards and can perform a total of 30 different actions. Talk about variety!

And the differences don’t stop there.

As one of the most fearsome machines in the game, the Thunderjaw demanded a new attack type.

An attack type that would up its damage output, target multiple hunters at once, and leave you wondering where it might come from next. And so Barrage attacks were born.

Mimicking the rapid-fire, ranged weapons of huge machines in Horizon Zero Dawn itself, Barrage attacks unleash a hail of projectiles or area effect explosions to spread damage throughout your party. Nasty!

(You’ll encounter Barrage attacks when facing other huge machines, but the Thunderjaw is where they began.)

Of course, you could just keep your distance… but then you won’t be close enough to earn any glory, either.

Speaking of glory, let’s take a look at the Thunderjaw’s removable components.

Removable components are a big part of Horizon Zero Dawn, and the board game is no different.

Like the video game, board game machines have components you can remove to limit the machine’s behaviours or damage output.

Huge machines (like the Thunderjaw) go a step further with the Multiple Component rule. Yes, these machines have components you can remove multiple times (and you’ll probably have to, if you want to survive).

This pairs with the Linked Systems rule. Want to disable a weapon? You’ll have to destroy every component to do it. After all, you might destroy one of the Thunderjaw’s head-mounted cannons, but it can still blast you with the other.

Of course, cannons aren’t the only weapon in the Thunderjaw’s arsenal. There are iconic Disc Launchers, too, which you’ll have another reason to destroy... 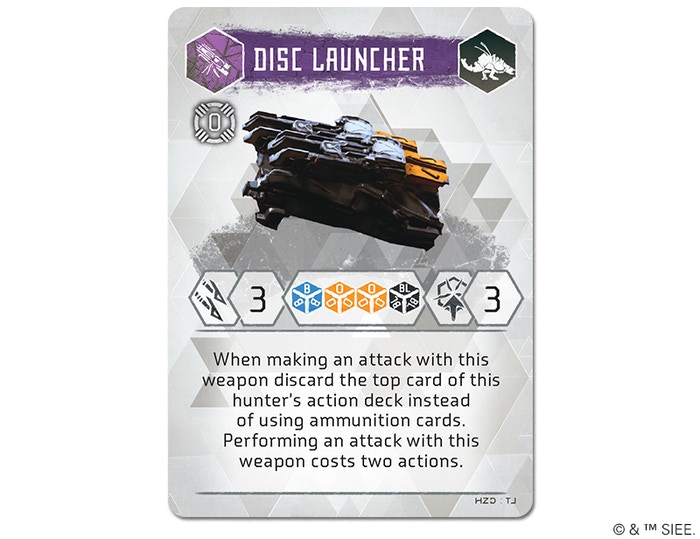 That’s right. Destroying a Disc Launcher gives you the option to equip the salvaged weapon, so you can turn the machine’s powerful weapon back against it!

How cool is that?

So, Seeker. Want to test your skills against this formidable enemy?

Then you’re in luck, because the Thunderjaw pre-order opens VERY soon. Join the list so you don’t miss the launch!